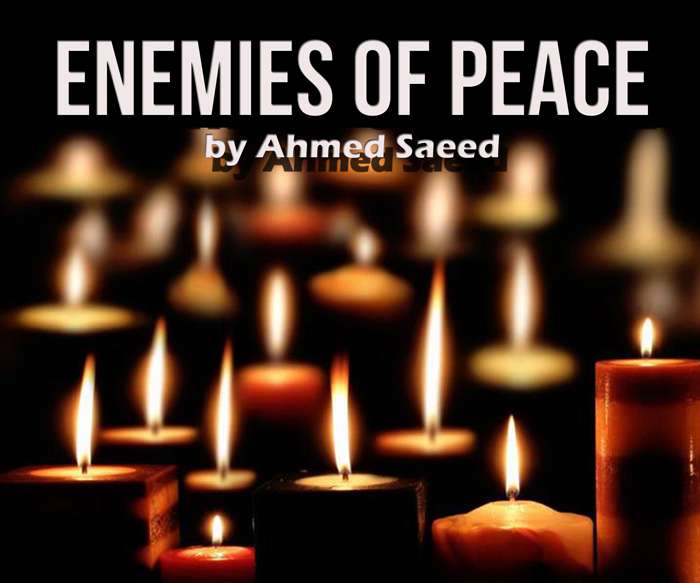 Enemies of Peace by Ahmed Saeed

After more than 2 decades of battling sanctions Iran returns as a major stakeholder in the Middle East on the Global radar, a welfare state under sanctions can only be expected to reach the pinnacle of economic stability and sustainable growth.

Pakistan hopes to play a pivotal role in deescalating the tensions between the Republic of Iran and the Kingdom of Saudi-Arabia for Peace and Stability in the region. With one of the world’s strongest and well trained forces Pakistan is the finest choice to act as a proponent for Muslim brotherhood and Harmony, a noble ambition. An old dying dream of the people of Pakistan to experience Harmony and Peace amongst its Muslim brother states might not be that easy to achieve.

Everyone remembers the creation of OIC (Organization of Islamic Cooperation) in 1969 and then subsequent assassinations of all the founding members, the last one being Col. Kaddafi. More than 40% of the world’s Oil production is from Muslim countries, a unity amongst such resourceful nations will naturally be a threat to those that envision dominating the globe and bringing about “One World Order”.

The American dominance in the Middle East is weakening as China and Russia enters the region to save guard their interests and consequently more turmoil in the region could be expected.

Visit of Pakistani Prime Minister Mr. Nawaz sharif and the revered General Raheel sharif to Saudi Arabia and subsequently to Iran brings with it renewed hope of new Muslim alliances to be forged in the region, although with it comes a threat to those that profit from war. Iranian acquisitions of Indian and Russian weapons and Saudi-Arabia’s accumulation of western weaponry has been greatly profitable for Industries that feed off war and human depravity. The Arms “bazaar” of the Middle East is flooded with weapons for every price, tensions between countries helps accumulate stock piles of weaponry which is otherwise useless during peace.

Enemies of peace have come into action again in Pakistan, yesterday’s attack on a University in Charsada and attack in Peshawar the day before are desperate attempts by the aggressors to divert Pakistan’s attention from the successful looking attempt to deescalate tensions between the two historical rivals.

The resilient nation of Pakistan has given many sacrifices in the war against terrorism, more than sixty thousand civilians and military personnel have lost their lives since the war on terrorism was initiated more than a decade ago in 2001. Despite being the most effected country from terrorism, the Pakistani nation stands strong and determined to eliminate terrorism from its midst’s.

The way ahead towards Muslim harmony is rather difficult but not unachievable; Pakistan’s initiative towards reconciling differences amongst Saudi-Arabia and Iran has been praised and adored by the advocates of Peace. The nation although once again faces a wave of terrorism coming in through the North-Western border.

After conducting a false flag operation on its own Air force base, than attacking Pakistani Embassy in Afghanistan, day before yesterday’s attack in Peshawar and yesterday’s attack on Bacha Khan University in Charsada are desperate attempts of the last few Indian supported terrorist left in the country.

Attempt to scare and demonize the children of Pakistan seems to be the new favorite way of Indian bred and trained hostiles. In the battle ground a coward will never take on an opponent bigger than his size, thus it makes sense when the Enemy, such as a coward it is, attacks our children.

The Pakistani nation stands proud and strong as ever and is determined to find and kill the last one of these terrorists and annihilate their supporters. There is no doubt that God will grant us Unequivocal Victory over those that intend to kill innocence and suppress our freedom.