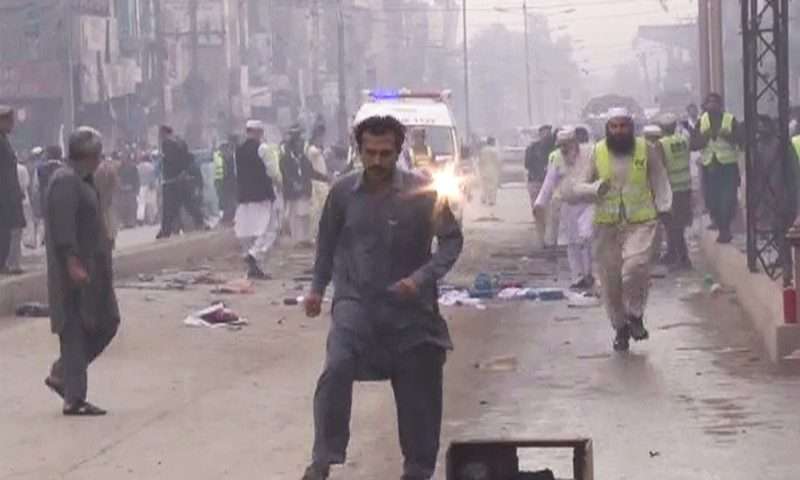 Peshawar – 15 Confirmed death as bomb exploded inside a Bus

According to details, a powerful bomb exploded through a bus carrying government employees in Peshawar on Wednesday, killing 15 people and causing injuries to 25.

The blast that took place near Peshawar’s Sunehri Masjid targeted a Civil Secretariat bus which was carrying government employees from Mardan to the provincial capital.

As per the Information Minister of Khyber Pakhtunkhwa, the targeted bus was carrying government employees belonging to the Secretariat. The bomb blast took place at the city’s busy Sadar area on the Sunehri Masjid road. The multiple injured were shifted to Lady Reading Hospital for medical treatment. Some of the patients were also shifted to the Cantonment Hospital. The bus had been completely decimated as all injured had been taken out of the vehicle.

According to further information shared by the police, the bus was carrying government employees from Charsadda to Peshawar. The intensity of the blast could not be ascertained however LEA officials said the blast had taken place due to an IED detonating inside the bus which had been purposely planted there. The bus was filled with people and had been attacked while it had stopped at a bus stop to offload passengers. The intensity of the blast threw the bus thirty to forty feet away from where the blast had taken place.

Dr Subhani revealed that as many as 26 injured had been brought to the Lady Reading Hospital.

Our correspondent from the area confirmed that the bomb blast took place at a busy street where a nearby police station and a girl school is located. Hospital sources claimed that the injured who were brought in were in critical condition since they were suffering from head, leg and spinal cord injuries.