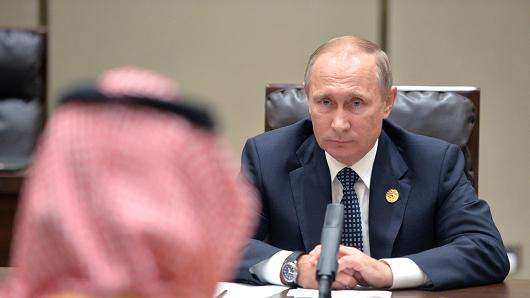 Russia, Saudi agree cooperation on oil price but not freeze

The world’s two biggest oil producers Saudi Arabia and Russia said Monday they had agreed to “act together” to try to stabilise oil prices, but failed to make headway on a production freeze. The two nations “noted the particular importance of constructive dialogue and close co-operation between the largest oil-producing countries.” This should have “the goal of supporting the stability of the oil market and ensuring a stable level of investment in the long term,” the energy ministers from both countries said.

Their comments came in a joint statement after a meeting at the G20 summit in China. “To this end the ministers agreed to act together or in co-operation with other oil producers,” the statement said, adding they had agreed to set up a “joint monitoring group” to offer recommendations aimed at preventing price fluctuations. Russia’s Energy Minister Alexander Novak described the announcement as marking a “new era” in co-operation between Russia and Saudi Arabia and insisted it would have a “critical significance” for oil markets, news agency Interfax reported. But there were no details on any agreement to freeze oil output, just weeks before Moscow and Opec meet in Algeria to discuss the crisis.

The globe’s major oil producers have been unable to strike a deal on freezing output, due mainly to a dispute between fierce regional rivals Saudi Arabia and Iran over Tehran’s desire to raise production levels after the lifting of sanctions. Novak said Moscow and Riyadh were discussing “concrete parameters” to halt price fluctuations but repeated that Iran should be allowed to return its output to pre-sanction levels. But Saudi Energy Minister Khaled al-Falih told Al-Arabiya television channel there was “currently no need to freeze production” after meeting Novak.

“A freeze is one of the preferred options but it is not needed for the moment,” he said. Russian President Vladimir Putin met Saudi Deputy Crown Prince Mohammed bin Salman on the sidelines of the G20 on Sunday and said they would work to address a global glut and overproduction that has hammered prices for the past two years. In an interview ahead of the meeting Putin – whose economy slumped into recession on the back of oil price falls – said that a freeze was “the right decision” and called for “compromise”. The oil market has been plagued by a stubborn supply glut that saw prices plunge to near 13-year lows below $30 at the start of 2016. While it has recovered recently, it is still well off highs above $100 seen in mid-2014.