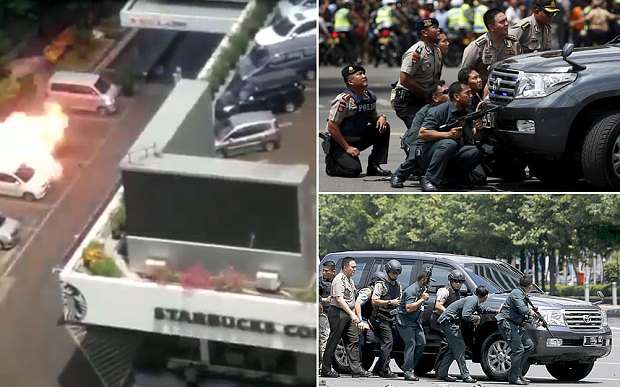 The terrorist attack on a police post near Central Jakartas Sarinah Departmental Store and Starbucks coffee shop at a building across the mall on Thursday morning might have claimed seven lives, according to an eye witness.

“I saw seven people who fell victims to the incident, including the attacker, who was shot down by the police,” stated 32-year-old Ruli Koestaman, who heard the explosion that might have been caused by a suicide bomber.

Koestaman claimed to have heard the first explosion at 10:45 a.m. local time, which was then followed by a second blast.

Shortly thereafter, the police and several armed attackers exchanged fire. At least five explosions were heard from the scene and was followed by exchange of fire, he remarked.

According to local media reports, three people might have been killed in the terrorist attack.

President Joko Widodo has condemned the terror attack and has ordered the security apparatus to hunt the attackers and crush terror networks in the country.

Meanwhile, following the terrorist attack, two lanes of M.H. Thamrin Road as well as Sabang and Wahid Hasyim roads were temporarily cordoned off by the security personnel due to safety reasons.

Police officers cordoned off the area to stop passersby, journalists, and employees whose offices are located in Jakartas Golden triangle business district, approaching the Sarinah mall.

Another witness named Usman Paharo, a passenger of a taxi passing on the M.H. Thamrin Road, claimed to have also heard an explosion and exchange of fire and saw smoke bellowing near the Sarinah malls building.

Dwi Setyowati, a press attache of the Francais dIndonesie Institute, said she closed her office, which is situated near the Sarinah mall, and urged all employees to not leave the building. Armed police and military personnel were deployed at the scene of the attack