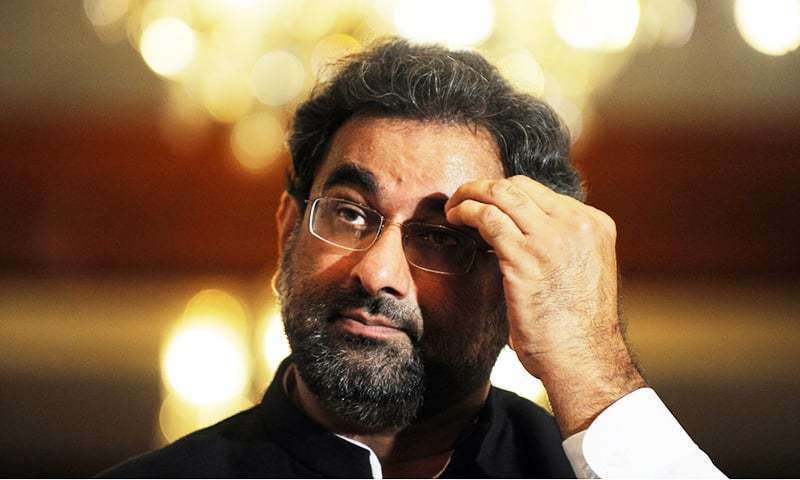 Abbasi at the Helm

ISLAMABAD: Shahid Khaqan Abbasi took oath on Tuesday as the 28th prime minister of Pakistan after the National Assembly elected him the Leader of the House with a thumping majority.

President Mamnoon Hussain administered the oath in a ceremony held at the presidency later in the evening.

The president, later, hosted a reception in honour of the newly elected prime minister.

Abbasi was nominated for the coveted position by the ruling PML-N as an ‘interim prime minister’ after the Supreme Court disqualified former PM Nawaz Sharif for hiding assets in his nomination papers.

The parliamentary party of PML-N named Sharif’s younger brother, Shehbaz Sharif, as his successor, but the Punjab chief minister must first enter parliament by contesting the seat left vacant by Nawaz. Abbasi is set to be rubber-stamped as placeholder until Shehbaz is elected in a by-poll scheduled on September 17.

Prior to the voting, the MQM’s candidate Kishwar Zahra withdrew her nomination papers in favour of Abbasi as her party had announced to support the ruling PML-N during talks held in Karachi prior to the National Assembly session.

“Not even a single legal expert has seconded the apex court decision. Nawaz Sharif left his office immediately after the verdict and the democratic system was continuing in the country without any break,” he added.

The new PM said despite perception that the PML-N would collapse, the party today was stronger than ever before as not a single member had defected after the apex court’s verdict while the democracy was gaining strength.

He said a larger court would soon be held, sans any joint investigation team (JIT), where the people and the political parties across the divide would vouch for the honesty of Nawaz.

“Nawaz Sharif never ever asked us for any corruption and pursued politics of principles,” he said.

Abbasi said Nawaz made Pakistan a nuclear power, turned it into an economic power, stabilised economy, added 10,000 MW to the national grid and brought LNG to the country to restart the stalled fertilizer plants and the closed-down industrial units.

He said ‘another fault’ of Nawaz Sharif was to bring $60 billion of foreign direct investment. While during the Pervez Musharraf era, not even a single electricity generation plant was added, nor was a motorway built or infrastructure laid, he added.

He thanked the National Assembly members for reposing confidence in him and also thanked the opposition for ‘remembering them’ in their abusive language during public gatherings.

He, however, called upon the opposition parties to join the government in its efforts for strengthening the democratic system and supremacy of the constitution.

Abbasi underlined the need to sustain the economic growth achieved by the PML-N government and laid stress on creation of more jobs through investment and the China-Pakistan Economic Corridor (CPEC).

He alluded that they would have to endure some pains to get gains and take some difficult decisions for sustainable growth.

Expressing his personal views about taxes, he said the non-tax payers would be netted to bring more stability to the financial health of the country.

The PM expressed his gratitude to the allied parties, including the MQM, the PkMAP and the JUI-F, FATA members and others for supporting him.

Later, Naveed Qamar, Sheikh Rashid and Sahibzada Tariqullah also congratulated the newly-elected Leader of the House in their separate speech.

Qamar said Pakistan was facing crisis in the backdrop of the Panama Papers when ousted premier Nawaz Sharif’s family was accused of having offshore companies, adding that everyone feared that Pakistan might face instability.

He said the Constitution must be protected, law must take its course, as “individuals do not matter”. He said the process “does not stop with the individuals unless power flows from this House”.

“You talked that you got one and half month as the PM and I give you 10 months and we will support you as long as you’re working in the larger national interests. I wish there should not have been the polarisation which has taken place now,” he said.

Congratulating Abbasi, Sheikh Rashid said it had been better if the elected prime minister might have also talked about foreign policy. He said exports of Pakistan had declined to $20 billion from earlier $25 billion while imports had swelled to $53.1 billion from $41.67 billion, which, he said, was alarming.

Responding to Abbasi’s claim that there are no allegations of corruption against him, Rashid said he had signed a most expensive LNG contract. He also talked about some negative aspects of the CPEC and said a lot of Chinese labour force was coming to Pakistan while under the Master Plan there would arrive 90,000 Chinese labour in Islamabad alone.

When he tried to talk about Maryam Nawaz and the Dawn Leak issue, uproar started from the treasury benches. Captain (retd) Safdar, who is also the son-in-law of the ousted premier, said he would strip Rashid if he did not take the name of his family with respect.

Rashid said Maryam Nawaz was like daughter to him but said if he (Rashid) was killed then Nawaz and Shahbaz should be held responsible for it.

Sahbazada Tariqullah said all those whose names were revealed in the Panama Papers should be held accountable.

When given the floor, MQM’s Dr Farooq Sattar said although his party supported the ruling party in the election of the Leader of the House, still his party was part of the opposition.

He also talked about the issues of Karachi and said that Karachi contributed 70 per cent of the total earning but not a single drop of water had been added to its quota for the past nine years.

PkMAP’s Mahmood Khan Achakzai called for strengthening parliament and Nasir Khan, an MNA from tribal areas, spoke about the serious issues being faced by the people of the tribal areas.