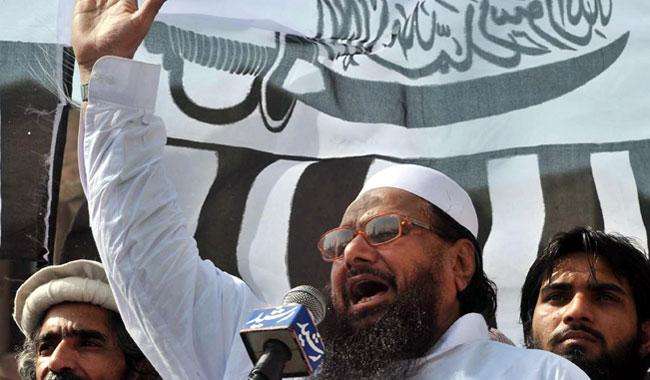 Act against JuD or face sanctions, US tells Pakistan

Pakistan has again been pushed to decide whether it’s going to declare Jamaat-ud-Dawa (JuD) as defunct or continue to give it a clean chit. However, this time the United States has clearly told Islamabad that in case of not following the ‘advice’, Pakistan may face sanctions. On the other hand, JuD may also change its face again with a new name, highly-placed government sources told this correspondent.

“Consultations are going on whether to declare JuD as defunct or not. However, the final decision will be taken after consultations between the civilians and military authorities,” one of the key senior officials directly linked with the matter revealed to The News.

JuD, a charity organization, is also alleged to be the front for the banned Lashkar-e-Taiba (LeT). The organisation, which is headed by Hafiz Saeed Ahmed, is allegedly involved in militant activities in Indian held Kashmir and has already been declared as a ‘foreign terrorist organisation’ by the United States in June 2014.

The sources claim that the United States assistant secretary of state in his meeting with Jalil Abbbas Jilani, Pakistani High Commissioner to the US, on January 11 this year raised the issue in the Asia Pacific Group on Money Laundering (APG)’s latest report.

The APG on Money Laundering is an autonomous and collaborative international organisation which is working since 1997 from Bankok, Thailand. The 41-member organisation includes the Financial Action Task Force, International Monetary Fund, World Bank, United Nations Office on Drugs and Crime, Asian Development Bank and the Egmont Group of Financial Intelligence Units. APG is involved in effective implementation and enforcement of internationally accepted standards against money laundering and financing of terrorism.

Reportedly, in the latest APG report, some key objections were raised regarding the activities and the financial traffic of JuD. The same were presented before High Commissioner Jalil Abbas Jilani.

The sources claim that the US authorities clearly told the high commissioner that if the objections raised in the report were not addressed, the US may put Pakistan in the blacklist of the countries in the International Cooperative Review Group (ICRG).

In case of being blacklisted, Pakistan has to tender a request for each of its international transaction through the international financial institutions.

The source claimed that the high commissioner soon after the meeting wrote a detailed letter to the Foreign Office (FO) informing the situation. The letter also informed the authorities that Pakistan has to write back a report until the 31st of January regarding the objections of the APG and the US authorities. In this regard, this correspondent contacted the spokesman of Foreign Affairs Nafees Zakria who said he was unaware of any such thing. Later, a formal question was sent to him in writing but no answer was received even after five days.

The sources claimed that the Foreign Office has raised this issue with the Finance and Interior Ministries. In this regard, two separate key meetings respectively with Finance Minister Ishaq Dar and National Security Adviser Lt Gen (retd) Nasir Janjua have taken place.

The sources claim that Dar, in a closed door meeting, had clearly said that the decision to ban the JuD would be made by the security establishment. The sources claim that it has unanimously been decided that the report containing the concerns of APG would be drafted by Syed Mansur Ali, the director general of State Bank Financial Monitoring Unit. Despite many attempts to reach the DG MFU, no response was received.

In this regard when this correspondent contacted another top official who was directly linked to the issue until recently, he said that all the concerns are in the picture and necessary actions are being taken by the relevant officials.

On the other hand, the JuD has started discreetly working under the name of ‘Tehreek-e-Azadi-e-Kashmir’ (Kashmir Freedom Movement). The latest name has been adopted by the JuD chief Hafiz Saeed since January 14, 2017 in a press conference. According to Saeed, they have declared the year 2017 as a year for Kashmir, so they will be using this name besides keeping their independent position as JuD. The sources claim that in the days to come, the JuD may change its face again and may also announce to join politics probably with the new name. This correspondent attempted to reach Yahya Mujhaid, the spokesman of JuD, but he too was not available for comment.