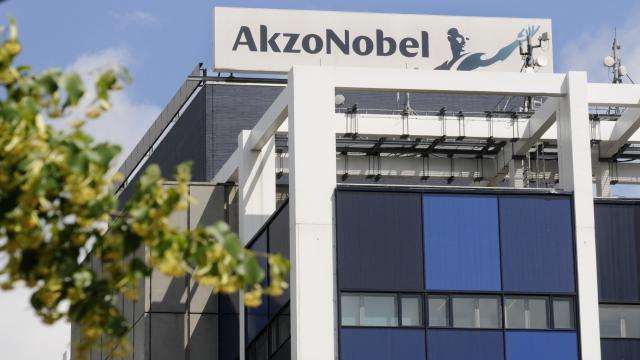 US paint maker PPG Industries raised its proposed offer for Akzo Nobel by about 8 percent to 26.9 billion euros ($28.8 billion) on Monday, increasing the pressure on its Dutch rival to enter into talks. PPG said its proposal was a “final” invitation to Akzo to enter negotiations and included a break fee in case the deal was rejected by regulators – attempting to address a concern that Akzo raised in rejecting two previous proposals from PPG.

The move turns up the heat on Akzo ahead of its annual meeting on Tuesday where it will face a group of shareholders unhappy it has not engaged with PPG. Shares in Akzo, the maker of Dulux paint, jumped as much as 6 percent to a record high of 82.95 euros following the improved proposal.

“We are extending this one last invitation to you and the Akzo Nobel boards to reconsider your stance and to engage with us,” PPG Chief Executive Michael McGarry said in a statement addressed jointly to Akzo’s chairman and its CEO on Monday.

“Our revised proposal represents a second increase in price along with significant and highly-specific commitments that we are confident Akzo Nobel’s stakeholders will find compelling,” added McGarry.

Akzo confirmed it had received a “third unsolicited proposal” from PPG but was non-committal in its response.

“The Board of Management and Supervisory Board of Akzo Nobel will carefully review and consider this proposal,” said Akzo, noting it was required by law to study the bid.

Analysts from Morgan Stanley said it was noteworthy Akzo had not rejected the bid out of hand, and remarked that PPG had made significant concessions – not only on the break fee but also on employment, pension plans, research and development spending and the location of production facilities. “This is the first time Akzo has said it will review an offer from PPG, although we will have to wait and see what decision is ultimately made”, they said in a note.