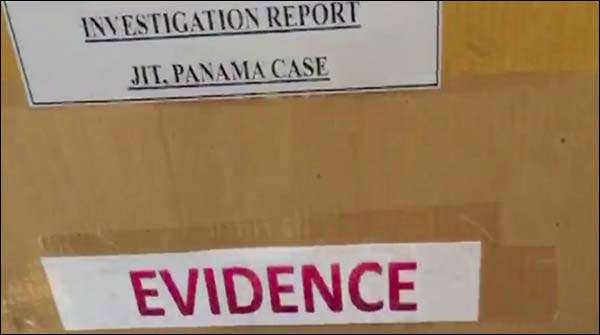 SC to examine JIT evidence rather than recommendations

A decision on whether the Prime Minister is disqualified or a reference is sent to the National Accountability Bureau (NAB) for a trial by an accountability court will be taken by the special implementation bench of the Supreme Court after it examines the report of the Joint Investigation Team (JIT) as well as all the evidence. Resuming arguments before a three-member bench led by Justice Ejaz Afzal Khan on behalf of Prime Minister Nawaz Sharif, advocate Khawaja Haris contended that the six-member JIT has no authority to recommend ‘reopening of cases’ of the Sharif family.

Justice Ijazul Ahsan said the JIT has recommended reopening of the Hudabiya Paper Mills case because the case has a nexus with the ongoing Panama Papers case. Justice Azmat Saeed Sheikh observed that the court would examine the evidence collected by the JIT rather than its recommendations and it is the documentary evidence that would provide grounds for the court to decide the matter in hand.

“We are not closing the door to the ruling family members’ submission of explanations,” Justice Azmat Saeed Sheikh said; and Justice Ijazul Ahsan observed that if additional documentary evidence from abroad is submitted, including from Luxembourg, the court will entertain it and provide an opportunity to all parties to present their arguments. During the course of proceedings, Khawaja Haris acknowledged that the UAE government had issued an Iqama (resident permit) to Nawaz Sharif as the chairman of the board of Capital FZE, an offshore firm.

Responding to Khawaja Haris’s argument that the JIT did not confront Prime Minister Nawaz Sharif regarding the documents of his employment in FZE, the bench observed that the Premier and his family members did not cooperate with the JIT during the inquiry of the matter. Justice Ijazul Ahsan said the court has been waiting for the Sharif family to provide the money trail from the start of the case; and added that the JIT was established to provide another opportunity to the family to prove the money trail – an opportunity that they have failed to cash in on.

He further remarked that the court will examine all the documents and then decide whether to send a reference to the National Accountability Bureau (NAB) or go for the disqualification of Prime Minister Nawaz Sharif. Later, the bench adjourned hearing of the case till July 19 (today)