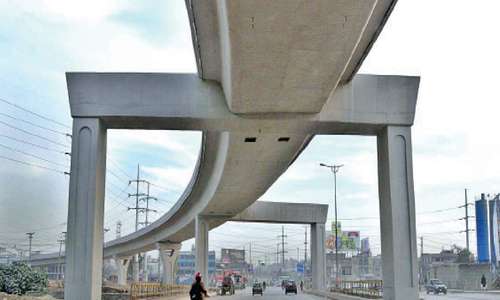 Development spending slows down to 32pc of allocation

The federal government’s development programme appears slowing down this year as disbursements to all the federal ministries stood at just 32 per cent of annual allocations in almost seven months against a target of about 50pc.

The release of funds to the federal ministries as of Jan 20 (about seven months) amounted to Rs75 billion against an annual allocation of Rs234.3bn, according to Planning Commission of Pakistan. This was even lower than Rs97bn released to federal ministries during same period last financial year when disbursement rate stood at about 44pc of Rs222.5bn allocation.

On top of that, the government disbursed less than 39pc funds (about Rs312bn) for the overall Public Sector Development Programme (PSDP) that also includes major corporations, special areas and special programmes in the first seven months of this fiscal year against the allocation of Rs800bn.

During the same period last year, the government released over Rs295 billion (more than 42pc) for overall PSDP against that years’ allocation of Rs700bn.

Under the government’s approved disbursement mechanism, the government should have released at least Rs385bn by Jan 20. However, substantial shortfalls in revenue collection during the period contributed to lower disbursements for the development programme, said an official explaining that it was practically impossible to contain major ‘on-tap’ expenditures like debt servicing, defence and running of the government.

In line with the government priority to end load-shedding, the disbursements for power sector projects have been scaled up significantly over the last two months. Total releases for the power sector stood at Rs47.6bn as of Jan 20 against an allocation of Rs130bn for the full year, about 36.6pc but still short of the target.

Also, part of the China-Pakistan Economic Corridor (CPEC), the releases to the power sector were struggling at just 12pc at the end of first five months (July-Nov) but were sped up by more than three times. Last year, the power sector consumed over 55pc (Rs63bn) of Rs114bn allocated funds in the corresponding period.

Likewise, the National Highway Authority (NHA) was provided Rs83bn against its annual allocation of Rs188bn or more than 44pc, for being the second top priority of the CPEC.

In contrast, NHA consumed only Rs31bn (about 19.4pc in first seven months of last fiscal year against an allocation of about Rs160bn).

As if that was not enough, the government also released just Rs12.6bn for the development projects in the water sector against the allocation of Rs31.7bn, accounting for about 40pc.

Under the government’s disbursement mechanism, it should release 20pc funds each in first two quarters of a fiscal year followed by 30pc each in subsequent two quarters. As such, the average disbursements in first six months should be around 40pc of the annual allocation.

The Capital Administration Division (CAD) was given Rs1.8bn in the first seven months against its allocation of Rs3.56bn while climate change division received only Rs16m (just 1.55pc) against its annual share of Rs1.03bn even though Pakistan Met Department has been struggling to make weather forecasts due to obsolete radar system.

The ministry of commerce was also given a paltry sum of Rs79m in seven months against its annual share of about Rs797m while the Ministry of Communications received only Rs114m against its allocation of Rs5.3bn.

Likewise, the Ministry of Defence was provided only Rs194m in seven months of this year against its annual allocation of Rs2.5bn while the Defence Production Division got just Rs460m against its approved share of Rs2.3bn.

Similarly, the ministry of federal education and training was given Rs513m against its approved share of Rs2.22bn.

Higher Education Commission was given Rs8.6bn against its annual share of Rs21.5bn while the Human Rights Division received only Rs24m for development against its full year share of Rs170m.

The Ministry of Interior was given a healthy amount of Rs8.13bn (about 70pc) in first seven months against its annual allocation of Rs11.56bn to ensure implementation of the National Action Plan to combat terrorism.

The report said the ports and shipping ministry was given only Rs834m against its allocation of Rs12bn while Pakistan Railways received Rs14bn against its annual share of Rs41bn.