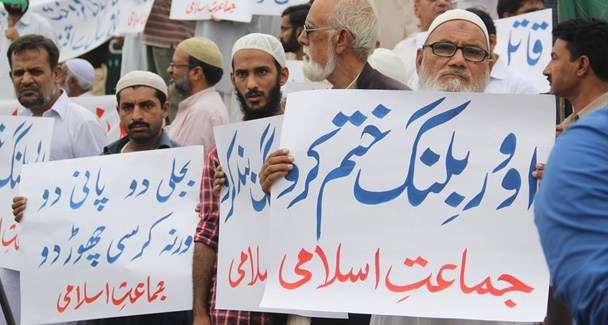 A day after its sit-in at Sahrahe Faisal in Karachi, Jamaat-e-Islami stage protest demonstrations at more than 50 points of the city on Saturday against load-shedding and excessive billing by K-Electric. JI Karachi chief Hafiz Naeem-ur-Rehman has announced that a ‘historic’ sit-in will be held outside K-Electric office on April 7.

Addressing a news conference soon after his release from police custody, the JI leader announced that his party is staging protest demos at nearly 50 different points in Karachi against K-Electric.

The JI is protesting against what it calls nexus of KE, NEPRA and government. It claims that KE has inflicted misery on consumers by excessive billing, tariff hike, load-shedding and ban on issuance of separate meters in multi-storey buildings.

Yesterday, Hafiz Naeem along with over two dozen people was picked up after clashes between police and protesters on main arteries of the city amid firing and teargas shelling