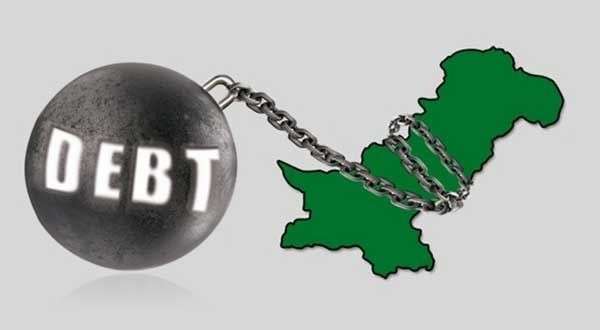 Pakistan may borrow another $750 million as a short-term foreign commercial loan from China, ironically to pay back the Eurobond debt incurred during the rule of Gen (retd) Pervez Musharraf, also underscoring that the country is no more able to retire its debt from own resources.

Due to the relatively low cost of borrowing from foreign commercial banks, the government is considering taking another commercial loan to return $750 million Eurobond debt, said sources in the Ministry of Finance.

Earlier, the Finance Ministry had a plan to issue another sovereign bond equivalent to $750 million to return the previous debt. The country’s Foreign Economic Assistance Plan for fiscal year 2016-17 included a $1 billion sovereign bond and a $750-million Sukuk bond. In September last year, the government raised $1 billion by floating Sukuk bond at 5.5% interest rate. It has not yet called the bids for hiring financial advisors to float another international bond.

The possibility is that the government will get this loan from China, which could be the third major borrowing from Beijing in the past six months, said sources.  Earlier, Chinese banks gave $1.3 billion to support the balance of payments situation and providing a cushion to foreign currency reserves.

Compared with borrowing through international bonds, taking loans from the commercial banks is hassle free, sources said. The government also opted for short-term foreign commercial bank loans to avoid scrutiny that it had to face after its second last launch of $500 million Eurobond in September 2015.

The Finance Ministry quietly borrows from foreign commercial banks without inviting competitive bids, which makes the job easier for officials at Q-Block.

The sources said that China was offering these loans at around 3.3% interest rate, which is far better than even the best rate of 5.5% that Pakistan got against $1 billion Sukuk bond issued last year. Its previous foreign commercial borrowings were at around 4.7% interest rate. 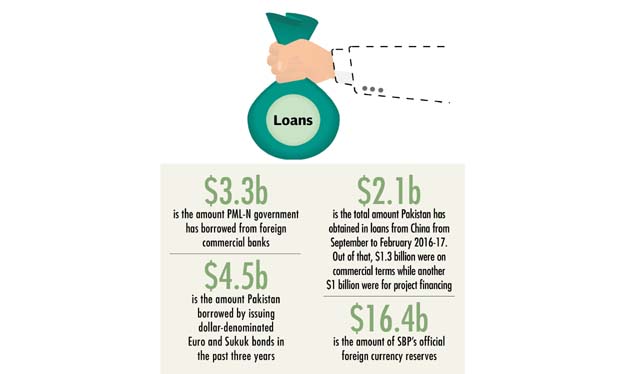 However, it’s a tradeoff between cost and rollover risk. Compared with five- to ten-year tenures of the bonds, these short-term loans are taken for one year to one-and-a-half-year period, which increases risks attached with exchange rate fluctuation.

Borrowing from foreign commercial banks is a new phenomenon for Pakistan in the 21st century, as both the military dictator-led government and PPP did not use this window, which is considered expensive compared with the loans that Pakistan has been historically taking from multilateral and bilateral sources.

After assuming power, the PML-N government has borrowed over $3.3 billion from foreign commercial banks. In addition to this, it borrowed $4.5 billion by issuing dollar-denominated Euro and Sukuk bonds in the past three years.

Pakistan has started borrowings to retire past borrowings, suggesting its inability to pay back the loans from its own resources. Independent economists see it as a sign of debt trap, which has now increased the cost of debt servicing.

After reaching a peak of $19.5 billion, the SBP’s official foreign currency reserves have now slipped to $16.4 billion again – a result of reduction in exports and remittances receipts and increase in foreign debt repayments.

The cost of foreign commercial borrowings is also low because the government has been waiving of all types of taxes on these borrowings. Just last month, the federal cabinet waived off 15% income tax on profit that foreign commercial banks were earning on $2.7 billion loans that these financial institutions extended to Pakistan.

The cabinet also gave ex-post facto approval of these loans that the Finance Ministry had borrowed without its prior approval and also by bypassing the competitive process.

China’s loans to Pakistan are growing at a rapid pace than its investment under the China-Pakistan Economic Corridor. In total, Pakistan obtained $2.1 billion loans from China from September to February 2016-17. Out of that, $1.3 billion were on commercial terms while another $1 billion were for project financing.