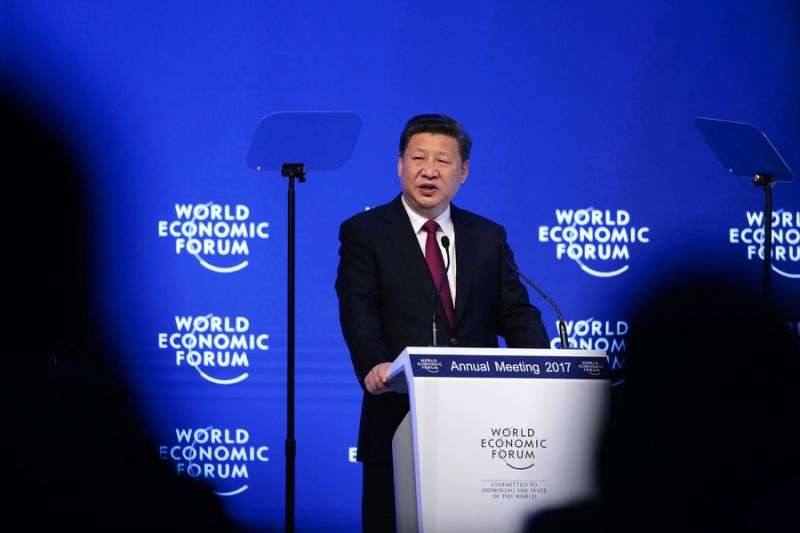 Chinese President Xi Jinping offered a vigorous defence of free trade at the World Economic Forum in Davos on Tuesday in a speech that underscored Beijing”s desire to play a greater global role as the United States turns inward. In the first appearance by a Chinese leader at the annual meeting of political leaders, CEOs and bankers in the Swiss Alps, Xi also cautioned other countries against blindly pursuing their national interests, in an apparent reference to the “America first” policies of Donald Trump.

Real estate mogul and former reality TV star Trump, who will be inaugurated as US president on Friday, campaigned on a promise to confront China more aggressively on trade.

He has vowed to renegotiate or ditch multilateral trade agreements and protect US industries from foreign competition by levying new tariffs on goods from abroad. Xi likened protectionism to “locking oneself in a dark room” in the hopes of protecting oneself from danger, but in so doing, cutting off all “light and air”.

“No one will emerge as a winner in a trade war,” Xi said in a nearly hour-long speech in a large conference hall as US Vice President Joe Biden looked on.

He said Beijing would not boost its trade competitiveness by devaluing its currency, something Trump has repeatedly said China has done in the past, and urged all signatories of a landmark climate deal in Paris last year to stick to the agreement.

Trump has criticised the deal and indicated he may pull the United States out of it.

LEADERSHIP VACUUM As Trump vows to focus on American interests, Europe is increasingly pre-occupied with its own troubles, from Brexit and militant attacks to the string of elections this year in which anti-globalisation populists could score gains.

This has left a vacuum that China seems eager to fill.

More than half a dozen senior Chinese government figures joined Xi in travelling to Davos, whereas in prior years Beijing sent fewer, lower-level officials. A large number of sessions at the WEF are focused on Asia this year, including one entitled “Asia Takes the Lead”.

“In a world marked by great uncertainty and volatility the world is looking to China,” WEF founder and chairman Klaus Schwab said before welcoming Xi to the stage.

Former Swedish Prime Minister Carl Bildt, reacting to Xi”s speech on Twitter, said: “There is a vacuum when it comes to global economic leadership, and Xi Jinping is clearly aiming to fill it. With some success.”

Xi”s appearance took place at a time of rising tensions between Beijing and Trump, who broke with decades of precedent last month by taking a congratulatory telephone call from the president of Taiwan, which Beijing sees as part of China.

Last week Trump said that America”s “One China” policy was up for negotiation, triggering a furious response from state-run Chinese newspapers who said Beijing would be forced to “take off the gloves” if Trump did not change his rhetoric. Although Xi painted a picture of China as a “wide open” economy, his government has come under mounting criticism from trading partners for its continued restrictions on foreign investments at a time when its state-run firms are aggressively pursuing acquisitions in Europe.

In an apparent nod to these criticisms, China”s cabinet announced ahead of Xi”s speech that it would take steps to ease limits on investment in banks and other financial institutions. But no further details were provided, nor a timetable for their implementation.

“Today, I think there is a big question mark as to how China pivots in this world,” Bob Moritz, global chairman of PricewaterhouseCoopers, told Reuters in Davos.

“Will they be more regional or global in their mindset and, more importantly, in their negotiations? It”s something we are going to have to watch over the next 12 months.”

”NEW NORMAL” China, the world”s top exporter, is heavily dependent on free trade and would be hit hard by a new wave of protectionism and a broader backlash against globalisation.

In his speech, Xi acknowledged that globalisation had become a “Pandora”s Box”, benefiting certain segments of society while harming others. “”It was the best of times, it was the worst of times,” Xi said, quoting Charles Dickens.

But he said globalisation was not to blame for the global financial crisis, which he attributed to an excessive pursuit of profits, nor for the flood of refugees from the Middle East, which he said was due to conflicts in Syria and the broader region.

Those concerns have eased but the International Monetary Fund warned on Monday about ongoing risks to the Chinese economy, including its high reliance on government spending, record lending by state banks and an overheating property market.

Xi tried to send a reassuring message, saying the economy had entered a “new normal” driven by household consumption. Despite a sluggish global economy, he said China”s economy was likely to have grown by 6.7 percent in 2016.

But some economists in Davos remain cautious.

“China is still one of the biggest risks, and I think the only reason it is not at the top of the list is that the United States has become such a locus of uncertainty,” said Kenneth Rogoff, an economist at Harvard University.