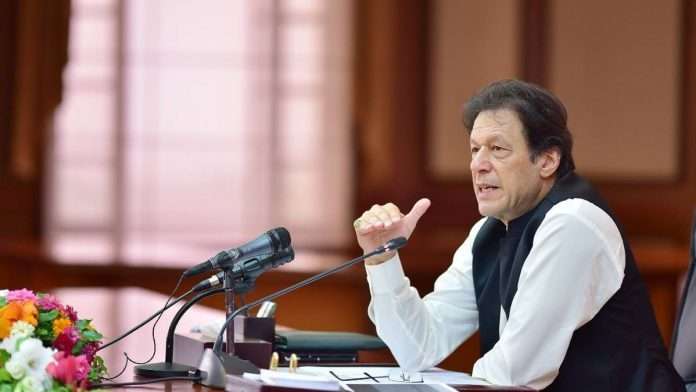 Prime Minister Imran Khan Wednesday said amid the sharp surge in COVID-19 cases with 50 plus deaths during the last 24 hours, the government would not allow the opposition to hold any public gathering to risk the people’s lives and aggravate the situation.

“Over 50 deaths have been reported during the last 24 hours. This has surged from eight, nine to 50 just in two weeks… They are risking the people’s lives. It will not help them. How so many gatherings they hold they will not get any NRO (National Reconciliation Ordinance),” the prime minister said while talking to the media here during his daylong visit.

He said considering the COVID-19 surge, the government had also called off its own public gatherings until the downturn of coronavirus curve.

Even the Islamabad High Court had also ruled against the public gatherings just because the virus spread fast with the people coming in close proximity, the prime minister added.

Accompanied by Punjab Chief Minister Sardar Usman Buzdar and provincial cabinet members, Imran Khan said the pressure was increasing on health facilities and the government was also concerned about the COVID threat to doctors, nurses and other health workers particularly in the cities.

He also urged the nation not to give up precautions to keep up the success the country had achieved during the first wave. Contrary to the neighbouring countries like India, there were fewer deaths in Pakistan, with the economy back on track within minimum possible time.

Pakistan’s economy was progressing at better pace in the Sub-continent with increased exports, well performing industries and appreciating currency, he remarked.

“But I fear, our hospitals will come under pressure and economy will suffer too, if we did not adhere to the precautions,” he said and appealed to the people to keep observing anti-COVID standard operating procedures (SOPs) as they did at mosques, markets and factories.

He urged the Ulema and other opinion makers to take the responsibility of saving the nation form the deadly disease by pursuing the people to follow the SOPs .
The prime minister said the government had decided not to close down factories and businesses in order to avert the hunger related deaths while protecting the people from the virus.

He, however, strictly advised the factory owners, shopkeepers and others to ensure observance of the SOPs, particularly wearing the face masks, which, he said, was the easiest tool to contain the pathogen.

Imran Khan said currently, Pakistan’s exports were better than those of India and Bangladesh. Faisalabad’s textile industry was running at full capacity and even fell short of the labor, he added.

The prime minister, in response to a question about the recognition of Israel, said Pakistan did not face any international pressure on the issue and still stood at the position taken by the Founder of the Nation Quaid-e-Azam Muhammad Ali Jinnah in 1948.

It may be mentioned here that the Quaid-e-Azam had stated in 1948 that Pakistan would never recognize Israel until Palestinians were given their right of a just settlement.

He in that respect also referred to the country’s historic successful diplomatic initiatives such as exposing India at the world level, positive role in the Afghan peace process, and improved relations with Afghanistan.

The prime minister said Pakistan, which was asked to “do more” in the past, was now being appreciated by the world, including the United States for its positive role for achieving peace in the region, including Afghanistan.

To another question, Imran Khan described the overseas Pakistanis as the country’s assets and hoped that they would invest in the two mega development projects of Ravi City, Lahore and Bundle Island, Karachi.

He said the government had launched a crackdown against land grabbers in Lahore, which had the backing of some political parties in the past. “You will soon hear the cries of Qabza Mafia in Lahore,” he remarked.

The prime minister said the government would soon take a big action against land grabbers and land encroachers in Lahore.

To a question about price-hike, he explained how mafias and cartels had manipulated the situation to make money out of the shortage and low produce of the commodities, particularly wheat, caused by untimely rains and bad weather over the last two years due to climate change.

He, however, mentioned that owing to the government’s effective measures including the import of sugar and wheat, prices of the two vital commodities (wheat and sugar) had witnessed decline.

About the country’s economic situation, the prime minister said with all major economic indicators showing positive trends, Pakistan’s economy was growing fast in the Sub-continent and was on the right path.

He said the current account deficit, which was at US $ 20 billion when the present government came into power, had been recorded in surplus for the first time in 17 years.
Similarly, he said, as the country’s exports were rising, the government had also curbed the huge trade deficit of US $ 40 billion.

To a question, Imran Khan said the Ravi Urban Development and Bundal Islanad were two crucial projects to stop the haphazard spread of Lahore and Karachi respectively.
The cities like Lahore would face severe problems of water, sewerage and pollution if the government did not establish new ones, he added.

Even if the government did not execute the Ravi Urban projects, the Lahore city would touch that project area but in a haphazard way without any planning and further polluting the River Ravi, he added.

The prime minister said the major objective was to protect Karachi and Lahore as the said projects would go vertical.

He said if the cities continued growing with the current pace, the green cover would reduce to bring food insecurity. Water treatment plants would be set up for water storage, which would also help recharge the ground water, besides stopping the flow of sewage water into the river, he added.

He said the Bundal Island would be developed as modern city to protect mangroves forest, treat the sewerage water and protect Karachi from ill-planned growth.

Besides the development, both the projects would also bring in the foreign exchange as the overseas Pakistanis were eying to invest in them, which would also beget job opportunities, he added.

Imran Munir of the Ravi Urban Development Authority told the media that barrages would be developed for retaining the water to help recharge water table and protect Lahore against floods.

An eco-city would be developed for forestation over the leftover forest land, besides developing a sewage treatment plant to clean water as well as benefit the surrounding population, he added.