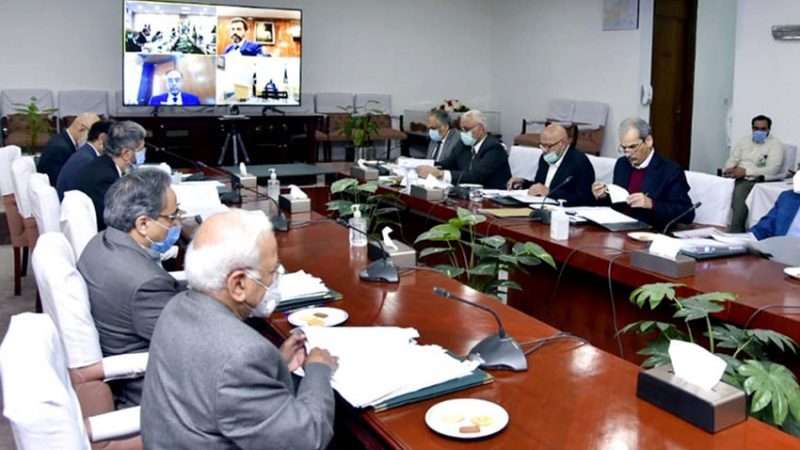 The Economic Coordination Committee – ECC of the Cabinet at Cabinet Division Monday constituted a committee to decide a timeline for export of Mango and Kinnow after due consultation with the stakeholders.

The committee consisting of representatives from the Ministry of Commerce and Ministry of National Food Security and Research (MNFS&R), according to press statement issued by the Finance Ministry here.

The meeting of the cabinet committee was chaired by Advisor to the Prime Minister on Finance and Revenue, Dr. Abdul Hafeez Sheikh while among others it was attended by Minister for Industries and Production Hammad Azhar, SAPM on Revenue Dr. Waqar Masood, SAPM on Petroleum Nadeem Baber and Advisor to the PM for Institutional Reforms and Austerity Dr. Ishrat Hussain attended the meeting. Governor State Bank of Pakistan Dr. Reza Baqir also participated through video link.

The ECC approved budgetary allocation in favour of NITB for provision of ICT services at the Prime Minister’s Office for Prime Minister’s Kamyab Jawan Programme for FY/2020-21 to the tune of Rs53 million as requested by the Ministry of Information Technology and Telecommunication.

In light of a summary presented by the Ministry of IT and Telecommunication regarding manufacturing of SIMs/Smart-cards in Pakistan, after due deliberation, the chair directed to constitute a Committee to examine the proposal and present a report for a way forward within two weeks.

The Committee would be chaired by the Minister of Industries and Production Hammad Azhar and would include representatives from the Ministry of IT & Telecom., FBR and Board of Investment (BOI).

ECC gave concurrence to the proposal by the Petroleum Division, in principal, regarding allocation of gas from Bashar X-IST to third party up to 1.0 MMCFD.

A summary was presented by the PIACL, Aviation Division before ECC regarding GOP cash support for the Voluntary Separation Scheme (VSS). After thorough discussion, it was decided to approve, in principle, the voluntary separation from service scheme for PIA.

ECC also approved four separate Technical Supplementary Grants for the Ministry of Defence and Ministry of Interior for various projects during current FY 2020-21.