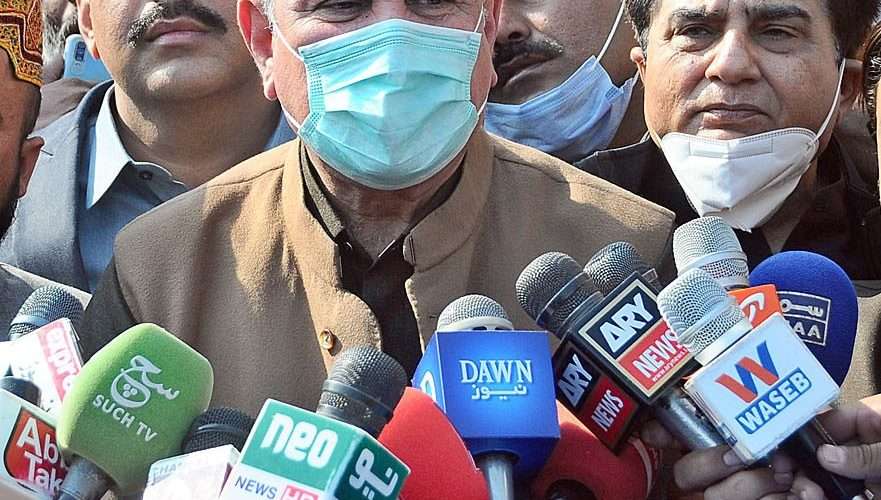 Talking to media persons after the concluding ceremony of 707th Urs of Hazrat Shah Ruknuddin Alam, Qureshi said they had held dialogue with the opposition leaders on legislation related to the Financial Action Task Force (FATF).

He said Pakistan People’s Party (PPP) and Pakistan Muslim League-Nawaz (PML-N) had pledged cooperation on the FATF legislation and in return sought some 34 amendments in the National Accountability Bureau (NAB) laws.

After thorough assessment of opposition’s draft amendments, it transpired that these seemed to be an NRO (National Reconciliation Ordinance), he said and added that he literally tore the draft into pieces.

Shah Mahmood Qureshi said Pakistan Tehreek-e-Insaf (PTI) government would never collude with the opposition leaders on corruption and plunder of national wealth. The FATF legislation was a matter of different nature, which should have been kept separate from the NAB laws, he added.

To another query about internal differences in JUI F, Qureshi remarked that many leaders of JUI F including Hafiz Hussain Ahmed, Moulana Sherani and others in KPK, did not agree with narrative of PDM. Similarly, one strong group of PML N was not in favour of resignations, he added.

About PPP, he said that Asif Ali Zardari, was personally taking party decisions. The PPP leaders who joined PDM meetings were apparently irrelevant in the Party’s decision making process, he added.

Makhdoom Shah Mahmood Qureshi also observed that government would not create any hurdle in PDM’s long march and expressed dissatisfaction over strategy of administration, adopted for PDM’s public meeting in Multan.

He pointed out that no hurdle was created in Lahore and PDM was given a free hand for its public meeting.

He stated that PTI government was not afraid of Opposition long march.

To another question about Indian nefarious designs, the Foreign Minister stated that India was fully cognizant of Pakistan’s capability to give a prompt response in case of any misadventure and added India itself was faced with internal unrest.

He said Indian plans in the Illegally Occupied Jammu and Kashmir (IIOJK) had completely failed and added Indian masses, Opposition and intellectuals were raising voices on the policies of Modi government.

He said unemployment rate had increased due to suspension of investments. Similarly, farmers were also protesting against the government’s policy in India, he added.

About backdoor diplomacy, Qureshi categorically stated that Pakistan would not hold parleys with India amid such circumstance and added India will have to end military siege of IIOJK.