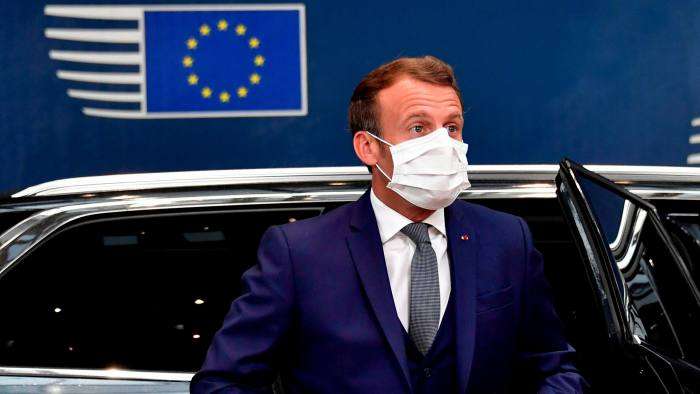 Where did all the bulls go? Rallies stall as EU summit begins

Europe’s stock markets and fast charging currencies were left treading water on Friday, as EU leaders met in Brussels to try to hammer through a 750 billion euro post-pandemic recovery fund.

European and world equity markets .MIWD00000PUS were heading for their third weekly gain in a row, but they were the smallest yet and Friday’s go-slow involved all the main asset classes from commodities to bonds. O/R .EU

London’s FTSE .FTSE, Paris .FCHI, Milan .FCHI and Madrid IBEX had all sagged into the red in early trading and though the euro ticked up, Italian and Spanish bond yields were struggling to stay anchored to their recent lows. GVD/EUR

“Presumably, as is the way of Europe, they will agree to come back from more talks followed by a compromise and a watered down deal,” Societe Generale’s Kit Juckes said of the EU discussions. “The positive though is that we are getting a recovery fund.”

An eventual green light to the 750 billion euro plan should finally lead to joint European debt, but investors are seeing their broader list of uncertainties and questions growing again.

Will the COVID-19 pandemic force economies into lockdown again? Will governments and central banks keep feeding the markets beast with stimulus? And finally, are tech shares losing their mojo?

Netflix shares had dived 9% after the bell in Wall Street on Thursday after its results had flopped. (Full Story)

Adding to the recent rise in U.S.-Sino tensions, Washington had said it was considering banning members of the Chinese Communist Party travelling to the United States. The party totals more than 90 million people. (Full Story)

Market watchers said investors were counting on more stimulus. As well as Europe’s recovery fund, the U.S. Congress is set to begin debating a new aid package next week, as several states in the country’s south and west implement fresh lockdown measures to curb the virus.

“We now see higher risk of a market correction, considering the improvement in hard economic data we have seen over the past couple of months is likely to halt,” said Tomo Kinoshita, global market strategist at Invesco in Tokyo.

STUCK IN A RUTTE

In currencies, the euro hovered below the four-week high it touched earlier this week, but was barely budging as European Union leaders met. (Full Story)

Dutch Prime Minister Mark Rutte, one of the main resisters to the recovery fund including mass grants, said that he was “not optimistic” that agreement would be reached on Friday as he arrived for the meeting.

The Netherlands wants countries receiving EU support from the fund to agree to reforms in their labour markets and pension systems, and is leading a group of several smaller EU nations calling for stricter conditions.

The euro fetched $1.14 EUR=, up 0.2% on the day and heading for its fourth straight week of gains against a dollar that has been struggling globally.

The yen was up fractionally at 107.13 per dollar JPY= and Sweden’s high-flying crown was up again. /FRX

The United States reported at least 75,000 new COVID-19 cases on Thursday, a daily record. Spain and Australia reported their steepest daily jumps in more than two months, while cases continued to soar in India and Brazil.

The two benchmark crudes had fallen 1% on Thursday too after the Organization of the Petroleum Exporting Countries and its allies, a group known as OPEC+, agreed to trim their record supply cuts of 9.7 million barrels per day (bpd) by 2 million bpd, starting in August. (Full Story)