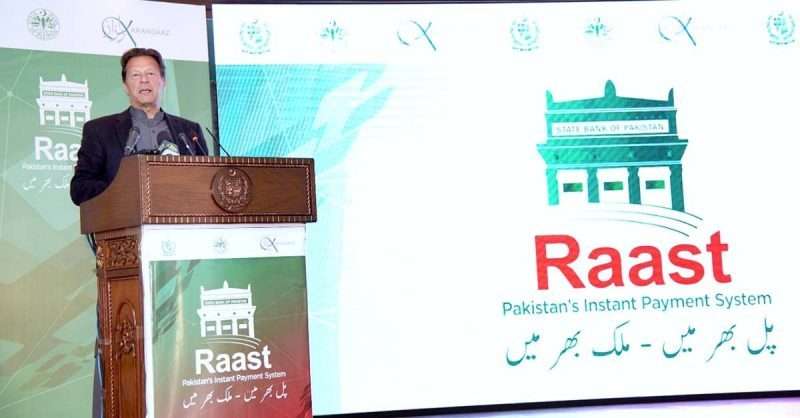 The prime minister, while addressing the gathering, termed the launch a major step forward by the State Bank of Pakistan towards Digital Pakistan, and said it would help include the low income groups and make them part of the mainstream economy.

He was optimist that it would go a long way in fighting poverty, particularly in the rural areas.

Raast is part of Prime Minister Imran Khan’s Digital Pakistan vision to include poor segments of the society in formal economy.

The faster payment system will be used not only to settle small-value retail payments in real time but also provide cheap and universal access to all players in the financial industry, including banks and fin-techs.

Imran Khan said the instant payment system would not only document the economy, but also generate more taxes to help build the country.

He regretted that only two million people in a country of 220 million paid taxes, which was not enough to build hospitals and schools, and provide other basic facilities of life for the common man. Only 3,000 of the tax payers paid 70% of the tax, he added.

The prime minister said foreign remittances had been constantly on the rise for past five months, and had helped stabilize the Rupee.

After a gap of 17 years, the country’s current account had gone into surplus, and lowered pressure on the Rupee and played a key role in strengthening the national economy.

Any pressure on dollar raised the cost of commodities – like edible oil, ghee, pulses etc imported for the common man, he added.

Imran Khan said with increase in revenue collection, the government would create extra space for spending on the human development – education, health and clean drinking water.

He said Pakistan was among the top countries with the highest growth rates in the region, but today it was left behind.

He hoped a move towards the Digital Pakistan would help put the country back on track.

The people in Pakistan were used to cash economy, however, now it was time to move forward, he added.

The prime minister said the programme would help give a boost to the Ehsaas Programme; particularly its mobile wallet and extend its reach to the women in the rural areas.

His government was working for the empowerment of rural womenfolk and had been included in various economic activities.

He extended gratitude to Queen Maxima of the Netherlands specially for inclusion of women in financial inclusion, the Bill & Melinda Gates Foundation for their support in the launch of the programme, also for Polio eradication, and the World Bank for its role in the launch.

Queen Maxima appreciated Pakistan on the launch of the instant payment system, effective strategy to deal with the Covid-19 pandemic, and the Ehsaas Programme for women empowerment.

According to the data available with the State Bank of Pakistan (SBP), digital payments only account for 0.2% of Pakistan’s 100 billion transactions today, whereas the share of digital transactions in the peer countries range from 1.5% to 7%.

SBP Governor Reza Baqir said the government employees and pensioners would be able to get payment of salaries and pensions in seconds. It would cut down on the delays in that regard.

He said under the prime minister’s directions, the Roshan Pakistan system had met with success. The banks were also extending support to the people, who desired to take loans for building homes.

Pakistan has had low electronic transactions due to low banking penetration, lack of trust and awareness of digital payment methods, limited interoperability, difficult accessibility and high cost of transactions.

However, Raast, the new Instant Payment System will facilitate retail payment settlements with much great efficiency.

Low-to-no transaction costs for end users: Raast is designed to operate at a cost recovery model to make digital payments affordable to end users of all socio-economic backgrounds.

Reliability and enhanced security: Raast will introduce more secure payment types, ensure that each transaction is authorized by the payer, and offer enhanced data protection and fraud detection services.