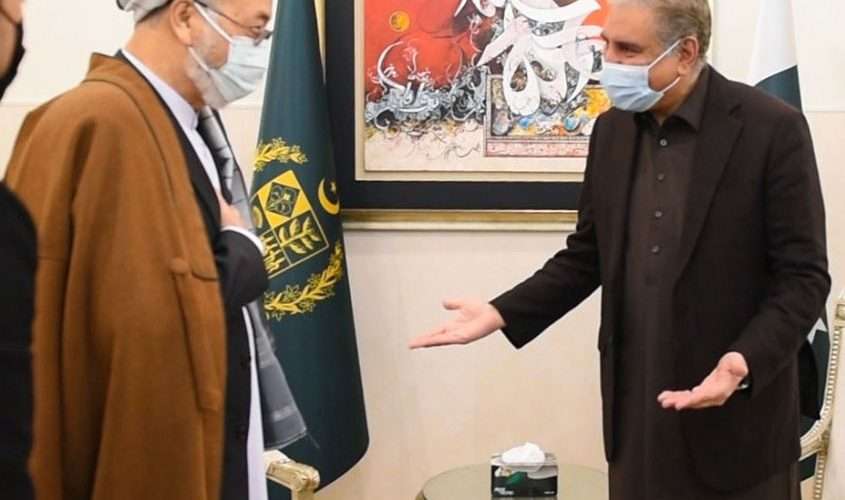 Foreign Minister Shah Mahmood Quershi on Tuesday said Pakistan would continue its reconciliatory efforts for peace in Afghanistan with a strong belief that there was ‘no military solution to the conflict’.

“A comprehensive political dialogue acceptable to the Afghan leadership is the only sustainable solution,” he said in a meeting with leader of Afghan Hezb-e-Wahdat-e-Islami Karim Khalili, here at the Ministry of Foreign Affairs.

The three-day visit of Karim Khalili along with his delegation is part of Pakistan’s ongoing policy to reach out to political leadership in Afghanistan to forge common understanding on the peace process.

The Foreign Minister stressed that no other country desired peace in Afghanistan more than Pakistan.

NO OTHER COUNTRY DESIRE PEACE IN AFGHANISTAN MORE THAN PAKISTAN: FM

He said the Afghan leadership had a rare opportunity to seize chance of peace in the region.

Qureshi said unfortunately, India was playing the role of spoiler in Afghanistan and mentioned that Pakistan had presented an irrefutable evidence before the world in this regard.

He said to facilitate the people of Afghanistan, Pakistan had introduced a new visa policy and was taking practical steps to promote bilateral trade.

He emphasized a speedy and dignified repatriation of Afghan refugees currently residing in Pakistan.

The Foreign Minister said Pakistan’s role in the Afghan peace process was being acknowledged by the international community.

We believe that peace and stability in the region is linked to lasting peace in Afghanistan, he added.

He also expressed gratitude to the leadership and people of Pakistan for hosting the Afghan refugees for decades.

“Pakistan fully supports all efforts for peace, stability and prosperity of the Afghan people,” the FO said in a statement issued prior to arrival of Karim Khalili.

The Foreign Office said Pakistan remained steadfast in its support for an inclusive, broad-based and comprehensive political solution of the conflict in Afghanistan through an Afghan-led and Afghan-owned peace process.