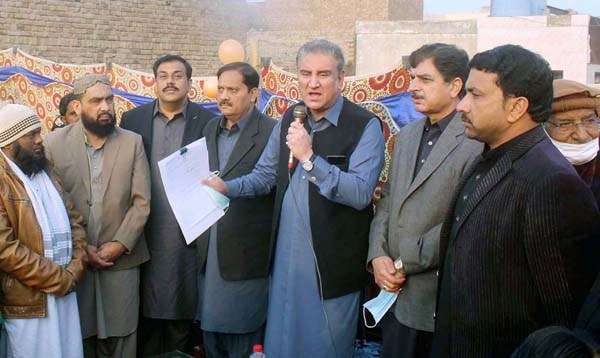 While addressing a ceremony here, the Foreign Minister Shah Mahmood Hussain Qureshi stated that “Waseeb” (local region) would surely achieve its recognition. “Whether we live or not but no one could suppress the voice of the region”, Qureshi remarked. He added that PTI believed in strong federation. The establishment of South Punjab province was inevitable for stronger administrative control and delegation of powers at gross root level.

He criticized the past rulers and stated that they could not create south Punjab province or even secretariat despite they had powers. Qureshi also maintained, being son of the soil, he would continue to serve the region. Shah Mahmood Qureshi observed that he had convinced Prime Minister Imran Khan for establishment of south Punjab province.

Foreign Minister Makhdoom Shah Mahmood Hussain Qureshi stated Pakistan was playing responsible role for peace process in Afghanistan. He, however, hinted that India was performing role of spoiler in Afghan peace process. India was using Afghan soil against Pakistan, FM stated adding that Pakistan had taken up the issue with Afghan Administration.

The minister of foreign affairs also maintained that stance of international community about Indian Illegally Occupied Jammu and Kashmir (IIOJK) had changed due to efforts of the incumbent government. The British parliamentarians made it clear that IIOJK was an international dispute. Qureshi hinted that it was success of Pakistan’s diplomatic approach.

Similarly, British parliamentarians’ viewpoint is also source of encouragement for the innocent Kashmiris. It also exposed the heinous face of India.

About PDM’s protest demonstrations, Qureshi observed that PDM lacked unity. PDM have internal differences over issue of resignations and long march. PML N have two different opinionS. Similarly, JUI had also been divided into two groups, maintained Qureshi. PDM is faced with frustration and it is protesting to dispel disappointment amid its workers.
Prime Minister Imran Khan, categorically stated that he would not give any NRO to looters.

PTI government strongly believed in serving masses, FM Qureshi said adding that the government was addressing people’s problems on priority basis. About sewerage system for Multan, Makhdoom Shah Mahmood Hussain Qureshi observed that Rs two billion were being spent on sewerage system of the city. The process of replacement of sewerage lines have been commenced. Qureshi hinted that water filtration plants were also being installed at union council level with an aim to provide safe drinking water facility to the masses.