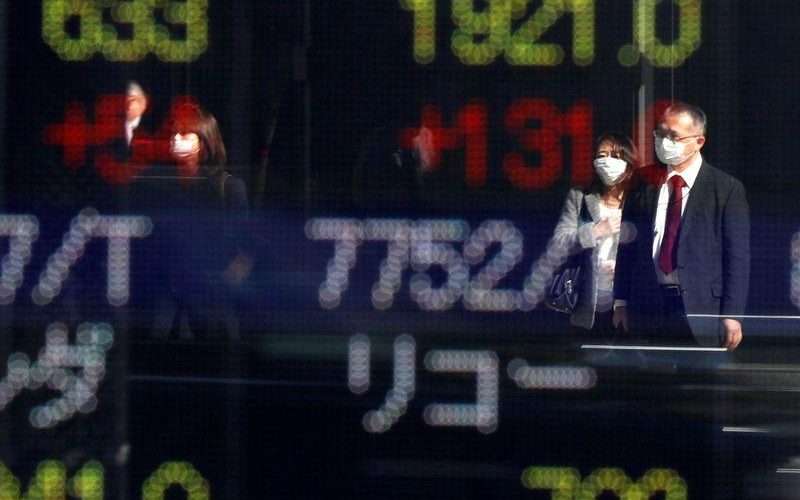 Bonds slipped, Japanese stocks jumped to a three-decade high and other Asian equities loitered near record peaks on Thursday as investors focused on U.S. stimulus prospects and extended bets on global recovery and growth.

Japan’s Nikkei rose 1.4% to its highest point since August 1990. It is up more than 8% in three weeks. MSCI’s broadest index of Asia-Pacific shares outside Japan was steady and just a whisker short of Monday’s all-time high. [.T]

U.S. Treasuries, which had climbed overnight after some reassurances that the U.S. Federal Reserve would keep buying bonds, were sold again after CNN reported that President-elect Joe Biden is mulling a stimulus package as large as $2 trillion. The yield on benchmark 10-year Treasuries, which rises when prices fall, lifted 1.7 basis points in Asia. [US/]

Ten-year Treasury yields are up more than 19 basis points this year as investors bet on Biden’s borrow-and-spend agenda being able to clear a Democrat-controlled Congress – and as worry creeps in about when the Fed’s support might taper off.

S&P 500 futures rose 0.2% and EuroSTOXX 50 futures rose 0.3%. “The number one question for global markets and equities will be when will the Fed start tapering,” said Frank Benzimra, head of Asia equity strategy at Societe Generale in Hong Kong. “This is where you can get some concern… but at the moment it is something that is a bit premature. We are in a context where you have growth accelerating, economic indicators are good, and in the U.S. the increased probability of fiscal stimulus.”

Currency markets are taking a little more of a wait-and-see approach, as investors are short dollars and wondering whether the eventual tapering might limit the greenback’s decline.[FRX/]

The dollar rose 0.2% to 104.12 yen with U.S. yields after the CNN report, which cited one lawmaker in contact with Biden’s advisers as its source. Biden is due to announce his economic plans on Thursday.

Traders are also anxious to hear from Fed Chairman Jerome Powell on Thursday, where any hint of an eventual tapering could send yields surging once more.

Hong Kong listed shares of tech giants Alibaba and Tencent rose after sources told Reuters and the Wall Street Journal that plans to extend a U.S. investment ban to the stocks had been scrapped.

In Washington, the Democrat-controlled House of Representatives impeached President Donald Trump for a second time. But markets have been more focused on his attacks on Chinese companies.

Trump bolstered a ban on U.S. investments in Chinese companies deemed to be linked with the military by clarifying late on Wednesday that American investors cannot own them after November 2021.