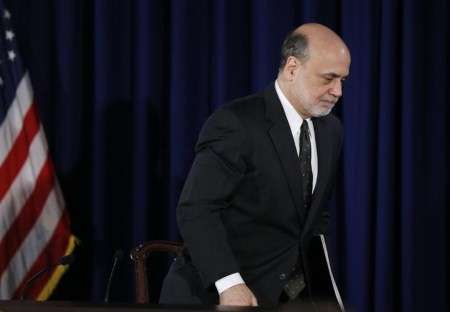 Bernanke’s confirmation that the Fed is getting closer to pulling back on its $85 billion in monthly asset purchases confirmed investor fears, sending stocks and bonds sharply lower and pushing benchmark Treasury yields to a 15-month high.

Moderate growth should lead to a further healing in the job market as headwinds facing the economy ease, Bernanke said. He also said policymakers expect inflation to move back up toward their long-term 2 percent goal.

The Fed’s willingness to dial back on the amount of stimulus it is pumping into the economy reflects growing confidence in the sustainability and strength of the recovery. Since cutting interest rates to near zero in late 2008, the central bank has more than tripled its balance sheet to about $3.3 trillion to drive borrowing costs down and spur hiring.

“The committee currently anticipates that it will be appropriate to moderate the monthly pace of purchases later this year, and if the subsequent data remain broadly aligned with our current expectations for the economy, we will continue to reduce the pace of purchases in measured steps through the first half of next year, ending purchases around mid-year,” Bernanke said.

He added that the jobless rate should have declined to near 7 percent from its current rate of 7.6 percent by the time bond purchases are halted. If its forecasts proved too optimistic, the Fed could stop reducing its bond purchases or even raise them again, Bernanke said.

The Standard & Poor’s 500 stock index  .SPX closed down nearly 1.4 percent, while yields on the 10-year U.S. Treasury note hit 2.36 percent, the highest level since March 2012, as traders recalibrated bets to account for a more hawkish Fed. The dollar also strengthened.

In a change of policy, Bernanke also said a majority of Fed policymakers believe the central bank should hang onto the mortgage assets it acquired through its unconventional monetary stimulus when it decides to tighten monetary policy.

He made the statements at a news conference on the Fed’s decision to continue buying $40 billion in mortgage-backed securities and $45 billion in longer-term U.S. government securities each month.

After a two-day meeting, the Fed’s policy-setting panel offered a more upbeat assessment of the risks facing the economy than it have given after the last meeting in May. “The committee sees the downside risks to the outlook for the economy and the labor market as having diminished since the fall,” it said.

Bernanke stressed that a slower pace of bond buying would still be adding support to the economy, and that any decision to begin removing stimulus remained a long ways off. Any eventual increases in interest rates would also be gradual, he added.

“They do indeed plan to taper purchases later this year and hope to be done by next summer. Bernanke wants to communicate that this is not necessarily tightening, but the market may not see it that way,” said Axel Merk, president and chief investment officer of Merk Investments in Palo Alto, California.

Esther George, the president of the Kansas City Fed, again dissented against the Fed’s expansion of its support for the economy, expressing concern it could fuel financial imbalances and hurt the central bank’s goal of keeping inflation contained. She has dissented at every policy meeting since January.

But in a surprise, the St. Louis Fed chief, James Bullard, also dissented, though in the opposite direction, arguing the Fed should have signaled more strongly its willingness to keep its stimulus in place to defend its 2 percent goal for inflation.

In its statement, the Fed repeated that it would not raise rates until unemployment hits 6.5 percent or lower, provided that the outlook for inflation stays under 2.5 percent.

Bernanke made clear that threshold was merely for considering a rate hike, not a trigger for necessarily making one. In fresh quarterly projections, 14 of the 19 members of the Fed’s policy panel said they did not think it would be appropriate to raise rates until some time in 2015.

A low inflation rate could allow the Fed to keep interest rates lower for longer and could even force additional monetary easing if low inflation persists or inflation falls further.

In a slight upgrade to their economic projections, officials forecast unemployment to average 6.5 to 6.8 percent in the fourth quarter of next year, and 5.8 to 6.2 percent in the final three months of 2015.

Analysts think U.S growth slowed a bit in the second quarter of this year in the face of fiscal drag from government spending cuts and higher taxes; recent readings from the economy have been mixed.

The labor market, a central focus of Fed efforts to boost growth, has notched steady improvement with 175,000 new jobs added in May. But U.S. manufacturers have been hurt by softer overseas demand, and inflation has fallen even further beneath the Fed’s goal.

The consumer price index was up 1.4 percent in May from a year ago. But the PCE price index rose just 0.7 percent in the 12 months through April, the most recent reading.