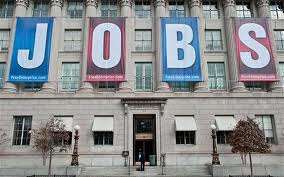 WASHINGTON, April 4 (Reuters) – The U.S. economy likely created jobs at the fastest pace in four months in March as it shifted into a higher gear after being held back by a brutally cold winter.

Employers are expected to have added 200,000 new jobs to their payrolls last month after adding 175,000 in February, according to a Reuters survey of economists. The jobless rate likely dipped one-tenth of a percentage point, returning to the five-year low of 6.6 percent reached in January.

“It’s looking like the economy is in the process of reaccelerating after a very severe winter,” said Robert Dye, chief economist at Comerica in Dallas.

The Labor Department will release its monthly jobs tally on Friday at 8:30 a.m. (1230 GMT)

An abnormally cold and snowy winter slammed the economy at the end of 2013 and the beginning of this year. Growth was further undercut by efforts by businesses to trim bloated inventories, the expiration of benefits for the long-term unemployed and cuts to food stamps.

But data ranging from manufacturing and services sector activity to automobile sales have signaled strength in the economy as the first quarter ended.

Should March hiring meet expectations, it would take job growth back near the 204,000 monthly average that prevailed through the first 11 months of 2013, and leave the economy close to regaining the positions lost during the recession.

A quickened pace of hiring could lead investors to bring forward expectations for when the Federal Reserve will move overnight interest rates up from near zero. Currently, bets are centered around the middle of next year.

Fed Chair Janet Yellen has argued the central bank needs to maintain a highly accommodative monetary policy for some time to come to eliminate slack in the labor market.

She has pointed to an unusually large number of long-term unemployed, who account for 37 percent of the 10.5 million out of work. Many other Americans can only find part-time work or have given up the job hunt.

“The labor market is moving in the right direction but not as quickly as the Fed would like it,” said Ryan Sweet, a senior economist at Moody’s Analytics in West Chester, Pennsylvania.

MOVING IN THE RIGHT DIRECTION

The private sector likely accounted for all anticipated employment gains in March, with government payrolls expected to have declined by 5,000 jobs.

An eighth straight monthly increase in manufacturing employment is expected. Factory job growth has, however, slowed since surging in November. But with auto sales accelerating sharply in March, hiring could pick up in the months ahead.

Construction payrolls are expected to post a third straight increase, even though the housing market is struggling to climb out of a soft patch.

Average hourly earnings probably rose 0.2 percent in March after rising 0.4 percent the prior month, while the length of the workweek likely increased to an average of 34.4 hours from 34.2 hours in February – another bullish sign.

“The shift in the weather should provide a more meaningful boost to the average workweek,” said Daniel Silver, an economist at JPMorgan in New York.

“The report will give us a better idea as to whether the pop in average hourly earnings (in February) was related to the unusual weather or representative of a more genuine firming in wage inflation.”