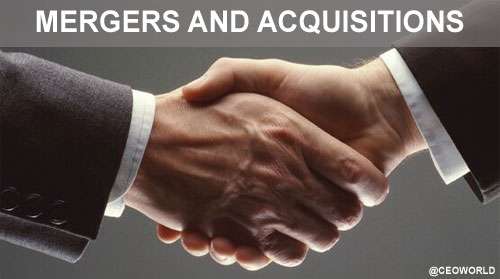 April 22 (Reuters) – The following bids, mergers, acquisitions and disposals were reported by 2000 GMT on Tuesday:

** Canada’s Valeant Pharmaceuticals International Inc VRX.TO said it had partnered with activist investor Bill Ackman in an unsolicited $47 billion bid to buy Botox maker Allergan Inc AGN.N in a move to eventually become one of the world’s five biggest drug companies. Valeant said it had lined up $15.5 billion in debt financing from Barclays and RBC Capital Markets to fund its proposed (Full Story)

** Omnicom Group Inc OMC.N, the No. 1 U.S. advertising company, said it was unable to predict when its $35.1 billion merger with France’s Publicis Groupe SAPUBP.PA would close as the deal was yet to win some key approvals. (Full Story)

** Novartis NOVN.VX and GlaxoSmithKlineGSK.L agreed to trade more than $20 billion worth of assets on Tuesday to bolster their best businesses and exit weaker ones as the drug industry contends with healthcare spending cuts and generic competition. (Full Story)

** Bailed-out Spanish lender Catalunya Banc, trying to slim down before being privatized, said on Tuesday it had sold a 1.48-billion-euro ($2 billion) package of failed loans to Asian investor Aiqon Capital. The nationalized bank, which is also in the process of trying to offload a 7-billion-euro portfolio of mortgages, did not detail the price of the deal with the debt recovery firm based in Kuala Lumpur. (Full Story)

** A Chinese consortium is the only bidder for a $1.16 billion project to build a 450 megawatt coal-fired power generation unit in Bosnia after Hitachi 6501.T pulled out of the race, Bosnia’s top power utility EPBiHJPES.SJ said on Tuesday. (Full Story)

** French bank Credit Agricole CAGR.PAsaid it had agreed to sell its 50 percent stake in Crelan, Belgium’s seventh-largest banking group, to Belgian cooperative banks. The transaction was estimated earlier this year to be worth 350-400 million euros. (Full Story)

** AT&T Inc T.N said Tuesday it would partner with The Chernin Group media holding company to invest $500 million in a joint venture for web-based video services, making it the latest company aiming to tap the growing consumer demand for online video. The move follows announcements by Verizon Communications VZ.N, DisneyDIS.N and Dish Network Corp DISH.O which have plans to roll out video products outside a traditional TV subscription. (Full Story)

** Nidec Corp 6594.T, a top Japanese maker of precision motors, said it would take full control of two subsidiaries through share swaps to strengthen the group amid tough global competition and weak demand in its core PC, digital camera and other markets. (Full Story)

** Pakistan’s MCB Bank Ltd MCB.KA will set up a wholly owned Islamic banking subsidiary while dropping plans to take a stake in Islamic lender Burj Bank, according to a filing with the Karachi stock exchange. (Full Story)

** A significant majority of shareholders in Chilean shipper Compania SudAmericana de Vapores VAP.SN lent their support to the firm’s merger with Germany’s Hapag-LloydHPLG.UL, allowing the agreed deal to clear a hurdle. (Full Story)

** HCA Holdings Inc HCA.N is among the bidders for Australian hospital operator Healthscope Ltd, which has put itself up for sale, the Sydney Morning Herald reported on Tuesday. HCA, the largest for-profit U.S. hospital operator, is competing against Malaysia’s IHH, which is being advised by JPMorgan and CIMB, and at least one other potential Asian buyer, according to the report. (Full Story)