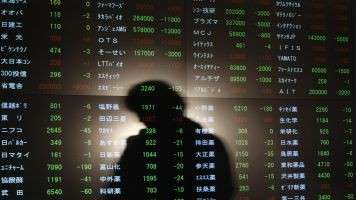 The MSCI Asia Pacific Index (MXAP) dropped 1.1 percent to 135.92 as of 9:07 a.m. in Tokyo, heading for the lowest close since Dec. 18. Global equities sank the most in more than 18 months yesterday, led by energy producers as benchmark U.S. oil fell below $50 a barrel for the first time since 2009. The prospect of Greece exiting the euro area loomed as Germany reported slower-than-forecast inflation.

“We’re going to have quite a volatile first half,” Nader Naeimi, who helps manage about $125 billion as Sydney-based head of dynamic asset allocation at AMP Capital Investors, said by phone. “We had tremendous gains in the U.S. last year and we’re likely to see a deeper correction. In Europe, weaker commodity prices are creating hints of deflation. It’s probably both a supply and demand issue as Europe’s economy continues to falter.”

The Shanghai Composite Index (SHCOMP) yesterday jumped 3.6 percent to its highest close since August 2009 as investors piled into shares of the largest companies and developers on the first trading day of 2015. Property shares advanced after Beijing said it would raise the cap on housing-fund loans for first-time buyers.

Services data from China to the U.S. is due today, along with a report on Australian trade.

The inflation rate in Germany, Europe’s largest economy, fell to 0.1 percent in December from 0.5 percent in November, the Federal Statistics office in Wiesbaden said yesterday. That was the lowest since October 2009 and below the median forecast of 0.2 percent in a Bloomberg survey of economists. A eurozone inflation reading is due tomorrow.

Greece began an election campaign that Prime Minister Antonis Samaras said may lead to an exit from the euro region should the Syriza party win.

To contact the reporter on this story: Jonathan Burgos in Singapore at [email protected]