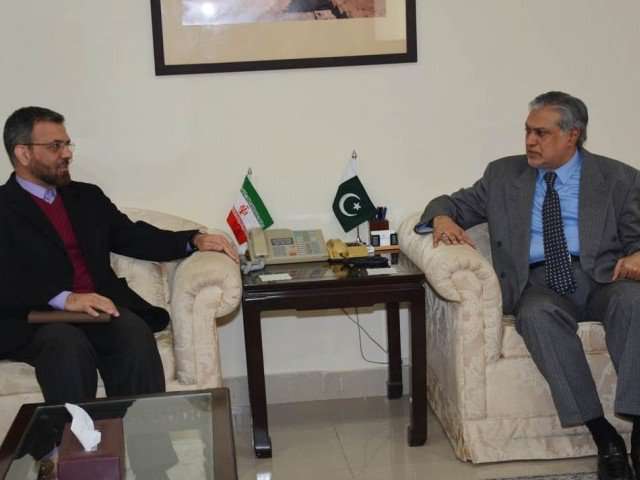 Minister Dar welcomed the Iranian Envoy on assuming his responsibilities and said he would receive all possible cooperation for promoting Pak-Iran brotherly relations during his tenure.

Ambassador Mehdi Hoonardost discussed with the Minister matters regarding upcoming visit of the Iranian President to Pakistan and also had exchange of views on enhancing Pak-Iran economic cooperation in the wake of lifting of UN sanctions against Iran.

The Finance Minister said Government and people of Pakistan looked forward to receiving the Iranian President which would help enhance relations between the two countries. He said the visit by Prime Minister Muhammad Nawaz Sharif to Iran last year had helped bolster Pak-Iran ties  and the Iranian President’s visit would give it  further boost.

H.E Mehdi Hoonardost said it was his endeavour and resolve to promote bilateral trade and economic cooperation to the level which could be truly reflective of the depth of Pak-Iran ties. He lauded the economic turnaround achieved by Pakistan and said both countries could supplement each other’s efforts for achieving economic prosperity.

The Finance Minister stated that in pursuance of the announcement made by the UN, the Government of Pakistan had issued notifications lifting sanctions against Iran. He said that lifting of sanctions provided a great opportunity to rebuild and strengthen Pak-Iran economic cooperation. He assured the Iranian Ambassador of full support and cooperation for efforts aimed at promoting bilateral trade. Iranian Ambassador thanked Finance Minister for his cooperation in getting GoP notification for lifting of sanctions.

They also discussed matters regarding next meeting of Pak-Iran Joint Economic Commission (JEC). Both sides agreed that the meeting would greatly help shape up the future course of action for all round cooperation. They expressed agreement to decide the schedule of the JEC through mutual consultations.

H.E Mehdi Hoonardost also thanked the Minister for receiving him for the meeting and said he would make all possible efforts for strengthening Pak-Iran relations during his tenure.