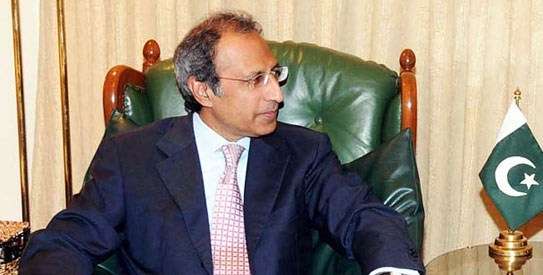 Advisor to Prime Minister on Finance and Revenue Abdul Hafeez Shaikh on Thursday said that previous governments’ financial policies caused severe damage to the national economy, but now Pakistan Tehreek-e-Insaf (PTI) government had steered the country out of economic crisis by paying back huge loans and taking comprehensive steps to boost exports.

He expressed these views during a meeting with Lahore Chamber of Commerce and Industry (LCCI) office-bearers and other businessmen at Governor’s House here.
He said the government was taking steps to put the economy on the path to sustainable growth and creating employment opportunities for the youth. He predicted that the graph of unemployment would go down sharply in the coming days.

The Adviser said that when the PTI government came to power, it inherited a huge debt that it had to repay due to which it had decided to seek financial support from the International Monetary Fund (IMF) for overcoming the crises, adding that PTI’s economic policies had started yielding positive results.

He said that all possible facilities would be extended to business community, but they would have to streamline their tax affairs in order to contribute to national exchequer, adding that the business community was playing an effective role in progress and prosperity of the country by creating employment opportunities besides contributing to the exports.

He said the government focused on enhancing exports as duties on numerous raw materials had been reduced, whereas the energy had also been provided at subsidized rates to export sectors.

The advisor said the problem of refunds on permanent basis would also be resolved, adding that through new refund system (faster plus), the private sector could track the progress on their refunds. If there was a slight delay, the online system would inform about the reason for the delay.

The government was also working on reducing expenditures as after many years, the primary deficit had been turned into a surplus, he added.

Despite financial difficulties, the government facilitated the businesses in COVID-19 scenario by introducing different schemes for deferring principle payments, loans for salaries, relaxation in energy bills for small businesses and tax breaks for the construction sector, he said and added that Ehsaas Programme had been started to give low-interest-rate loans to young entrepreneurs.

The advisor said the government had allowed the import of wheat for avoiding food shortage and in this regard, a comprehensive package had also been given to the utility stores for essential food items.

Hafeez Shaikh said that the SMEs Policy was being formulated by the Ministry of Industries, adding that the government would also bring other potential sectors like Halal food, pharmaceutical, etc., in the same facilitation regime as the five other zero-rated export-oriented sectors.

Speaking on the occasion, Punjab Governor Chaudhry Mohammad Sarwar said that the government attached significant importance to private sector as it kept close liaison with the private sector for wealth creation and employment generation.

He said the present government had worked hard to reduce the current account deficit from $20 billion to $3 billion. The construction industry had started picking up due to the recent incentives package by Prime Minister Imran Khan, he said and added that reducing the energy cost for private sector by focusing on solar energy was being ensured.

Speaking on the occasion, LCCI President Mian Tariq Misbah appreciated the steps taken by the government for facilitating the business community and said the energy cost for all export sectors needed to be reduced.

The availability of gas for industry should be ensured 24/7. The government should give interest-free loans to the small traders, he demanded.