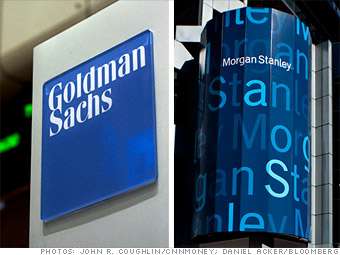 FOR GOLDMAN SACHS AND MORGAN STANLEY, BORING IS BEAUTIFUL

FOR GOLDMAN SACHS AND MORGAN STANLEY, BORING IS BEAUTIFUL

April 17 (Reuters) – A year ago, soon after Morgan Stanley  MS.N posted disappointing quarterly earnings, Chairman and Chief Executive Officer James Gorman told board members the bank was on the right track and investors who sold shares had made a mistake.

On Thursday, Gorman proved himself right, by showing that his plan to lighten up trading risk and focus on wealth management is paying off. Morgan Stanley posted a 55 percent gain in first-quarter profit. The bank’s revenue from fixed-income trading rose 9 percent from the same quarter a year ago, even as it reduced risky assets by tens of billions of dollars. Morgan Stanley also showed steady progress in using deposits from the wealth business to lend more. (Full Story)

Gorman is working to give Morgan Stanley steadier earnings growth through increasing its reliance on businesses such as wealth management and underwriting, whose revenues are less likely to plunge. The shift, started under prior chief executive John Mack, came after the bank nearly failed during the financial crisis.

Morgan Stanley’s fortunes in the quarter sharply diverged from those of Goldman Sachs Group Inc  GS.N which has made fewer strategic shifts since the financial crisis.

Goldman posted an 11 percent decline in profit, and for the 13th time in the past 17 quarters, revenue from its fixed-income, currency and commodities trading business declined. Even with that decline, Goldman’s businesses of trading for clients and investing on the bank’s own behalf still accounted for 64 percent of the bank’s revenue during the quarter.

Goldman executives argue that those figures are misleading because its trading and investing businesses are tightly connected to investment banking and asset-management, where the bank outperformed. And because Goldman was strong enough to retain trading businesses that rivals have exited since the crisis, it can reap profits that they will miss as market activity improves.

Still, many investors and analysts focused on challenges Goldman will face from higher capital requirements and restrictions on some trading activities that were its most profitable in the past.

“Goldman’s business looks very similar to what it did pre-financial crisis,” said Devin Ryan, an analyst at JMP Securities. “For them, it’s a matter of those businesses showing signs of life or recovering.”

His view is not uncommon among analysts: 13 recommend Morgan Stanley as a “buy” or “strong buy,” compared with six for Goldman Sachs; only one analyst recommends clients sell Morgan Stanley shares while three hold that view for Goldman, Starmine data show.

One reason analysts may like Morgan Stanley: its shares trade at less than the accounting value of the bank’s assets minus liabilities, or book value. That is a cheaper valuation than Goldman’s shares, which trade at a premium to book value.

Morgan Stanley’s decision to retool itself while Goldman Sachs refrains from big changes reflect a debate happening across Wall Street, over whether industry profits are permanently depressed because of new regulations, or whether earnings will return once trading volumes and deal activity rebound.

Before the financial crisis, Wall Street banks could generate a return on equity – a measure of how much profit a bank can wring from shareholders’ money – of 30 percent or more. Today banks including Morgan Stanley are struggling to reach returns of 10 percent, the bare minimum that some investors demand.

Many top Wall Street executives insist that their revenue problems are “cyclical,” and that results will improve as the economy picks up.

But opinions at banks are diverging as new regulations are finalized that dictate how much capital banks need, among other rules.

On Thursday, Goldman Chief Financial Officer Harvey Schwartz acknowledged that Wall Street profitability may never again reach pre-crisis heights, but he stopped short of saying Goldman should reshape itself to reduce its reliance on trading.

“Our clients wake up today and they focus on the same issues they always have,” Schwartz said in response to a question from Reuters.

Despite declining revenue in its key business of bond trading, Goldman is already boasting a return-on-equity of nearly 11 percent. Morgan Stanley this quarter posted a return on equity of 8.5 percent.

For some investors, the return on equity now is less important than the strategic directions of the banks. Christopher Grisanti, who runs Grisanti Capital Management, sold Goldman shares to buy Morgan Stanley in September 2011. He has more than doubled his money since then. He believes in Gorman’s plan and is holding on to his shares for now.

“I think we’re in the third or fourth inning and the team is starting to get momentum,” said Grisanti. “It would be a real home run if they continue this evolution to become even more of an asset manager – more like a T. Rowe Price.”

While that would be the “ideal outcome” for him, he added, “I don’t think we’ll hold it that long, and I don’t think they go that far down that road.”