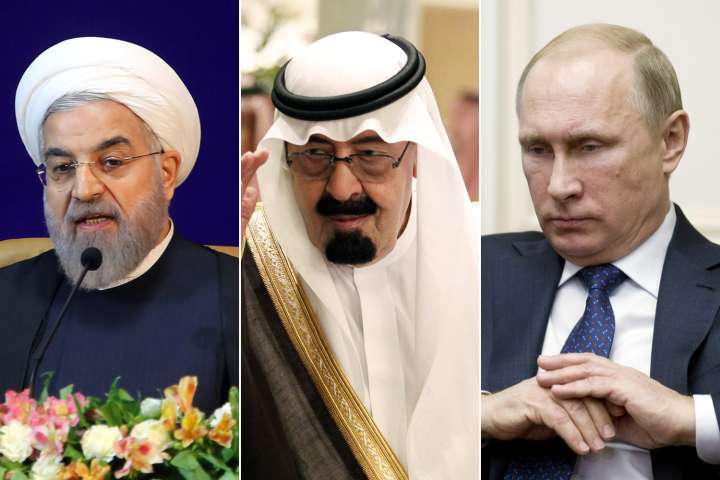 This week, oil fell through the price floor of $60 a barrel and gas at my local filling station was $2.26 a gallon.

That’s great news for commuters and almost every business, but wonderfully bad news for our ugliest enemies.

If oil prices remain low through next year, the effect on rogue governments, from the Russian Federation to Venezuela, will go from damaging to devastating.

But Western economies (and China’s) stand to benefit, with cheap oil possibly tickling Europe’s snoozing markets awake. Even most underdeveloped states will get a welcome break.

This price plunge has been driven by Saudi Arabia, OPEC’s dominant power. While it’s true that part of Riyadh’s actions respond to the energy renaissance in North America, the greater motivation is breaking Iran’s will.

The Saudis believe they can no longer rely on the US to contain Tehran’s imminent nuclear threat, so they’re out to do what our lukewarm sanctions couldn’t.

There’s no love lost between the Saudis and the Russians, either. The Saudis want the Assad regime in Syria to go. Moscow props it up.

The Saudis aren’t doing any of this to help us, but it helps us just the same. Now the key issue is: How long will prices stay low?

Markets can be unpredictable, but an emerging global glut of oil, decreasing demand and greater efficiencies suggest that petroleum products should remain relatively cheap — with fluctuations — for the next few years.

That’s good news for democracies and free markets, but a nightmare for dictators everywhere.

Here are the key losers — and winners.

Tehran had learned to live with Western sanctions. But oil has been its lifeline. And to balance the books, oil has to sell between $135 and $140 dollars per barrel. Good luck with that, Supreme Leader!

With the barrel price at barely 40 percent of Iran’s requirement, the economy’s going to hemorrhage. Iran’s leaders will be under far greater pressure to compromise on the nuclear weapons — unless we keep easing sanctions for nothing in return. This is the last chance for negotiations to bring results.

The fascinating angle here is that Saudi Arabia’s doing more for Israel’s security than the Obama administration’s been willing to do. Common enemies generate unexpected — if unadmitted — alliances.

The price collapse could not have come at a worse time for Bad Vlad Putin. The Russian president needs an oil price around $100 a barrel to prop up what’s become a wartime economy.

Oil and gas provide up to a third of budget revenue and compose two-thirds of exports.

Sanctions imposed over Putin’s aggression have gnawed at Russia’s economy, but this price drop bites deep: The ruble has crashed, Russian bonds are pathetic, and foreign reserves are bleeding.

While Russians will put up with harder times than Westerners will, Putin’s made extravagant commitments (bet he’d like to have back the $50 billion he squandered on corrupt Olympic construction).

The world’s fave bare-chested bully had embarked on a massive arms buildup, with a hi-tech $5 billion command center just unveiled. But Putin’s visions of military resurgence are becoming unaffordable

Putin’s popularity remains high. For now. The gravest worry is that, with his back to the wall, he’ll play the Mother Russia card and attack again.

Iraq has nothing to offer the world but oil. And Baghdad needs to fund a survival struggle against Islamic State militants.

The Saudis don’t like the Islamic State caliphate claims, but they have no sympathy with Baghdad’s Shia-dominated, Iran-aligned government, either. Don’t expect price rises for Iraq’s sake.

The problem is that we’ll end up paying more of the battle bill for Baghdad’s pretense (and our State Department’s fetish) that Iraq can be kept intact. The conquests made by Islamic State terrorists aren’t the cause of Iraq’s troubles, just one more symptom.

Although some energy players will suffer from lower prices and we’ll see a wave of corporate consolidation, the oil-price drop’s great news for American consumers, businesses and even, in the longer term, our military.

An economy that had begun to recover — despite Washington — is getting another vitamin shot, while working-family budgets get a break.

The Saudi strategy also aims to hurt our burgeoning energy industry, such as the shale oil extraction in North Dakota. But it won’t derail it. And the overall effect on our economy will be positive.

Perhaps the greatest benefit, though, is that the oil-price plummet is doing what the Obama administration lacked the guts to do: It’s smacking down our enemies.

Former Secretary of State Hillary Clinton didn’t reset relations with Moscow, but bargain-basement oil prices might. Iran may have to give up its dreams of nuclear hegemony in the Middle East.

And with the exception of China, almost every major state that benefits from lower oil prices, from Japan to India, is either an ally or neutral.

Pursuing its own interests, Saudi Arabia may have rescued our failed foreign policy.

A worker examines a pumpjack at a PetroChina oil field in China.Photo: Reuters

The world’s second-largest energy consumer (after the USA) and dirt-poor in domestic oil and gas reserves, China had been on track to spend half a trillion dollars a year on oil-and-gas imports.

If petroleum-product prices remain low, that figure could be cut in half. Cheaper oil and gas also offer China another path to reduce its massive pollution, much of which comes from low-quality, internally produced coal. China’s fantastic growth rates had been slipping, but lower oil prices will help soften any fall.

The drop in energy-import costs comes as a timely blessing. Once-robust growth rates have fallen by 60 percent and India must spend massively to import three-fourths of the oil it consumes.

Lower energy costs should help New Delhi sustain GDP growth, if at a less-torrid pace than in the past decade. And the drop in prices makes the gas pipeline Russia wants to foist on the region less attractive.

A decade ago, such a price collapse would have devastated Mexico’s then-oil-dependent economy. But diversification, deregulation and smart contracting on options markets, should see Mexico’s economy through at least the next year without a major impact from lower oil prices.

If, however, oil prices remain low for years to come, Mexico’s economy will suffer. A full third of government revenue comes from petroleum sales and, even now, oil accounts for 15 percent of exports (behind assembled goods).

A sharp downturn in Mexico’s economy while our own economy booms guarantees more illegal immigration.

A tar sands mine facility near Fort McMurray, in Alberta, Canada.Photo: AP

“Woe, Canada?” Or just, “Whoa, Canada!” Sharply lower oil prices make the exploitation of Canada’s tar-sands deposits less viable — a grave disappointment to budget wonks in Ottawa — but Canada’s diversified and robust economy should weather the sectoral crisis: One industry’s loss is the gain of several others.

Some localities will be hit hard (just as in the “lower 48”), but North America still looks a great deal brighter economically than leftists around the world have warned for a century.

Even before the oil-price crash, Venezuela’s economy was literally wiped out — with no toilet paper on sale. There are shortages of everything from flour and milk to diapers. Once the richest South American country on a per capita basis, a decade and a half of socialism has wrecked Venezuela’s oil industry and left its economy gasping.

Capital flight, party cronyism, crippling price controls and the staggering corruption that always marks leftist utopias have left the state with a single functioning institution — the secret police (trained and bolstered by Cubans).

Heir to the late President Hugo Chavez’s “Chavismo” (the real voodoo economics), hapless President Nicolas Maduro’s as incompetent as his mentor, but lacks his charisma. Naturally, he blames everything on the Yanquis.

If oil prices stay down, the government in Caracas will go down. But it won’t be pretty. And the economy will take decades to rebuild.

With its big, diversified economy, Brazil should be able to weather the loss of oil revenue. But the current socialist government’s hooked on energy income to shore up creaking social programs and cushion the economy from the effects of massive corruption.

And the country’s energy industry is a mess. Brazil will survive, but not thrive, while oil prices stay low.

With reform efforts crumbling and Boko Haram rampaging in the north, Nigeria now faces a looming budget crisis. In Africa’s most-populous country, three-fourths of government revenue, a full third of the economy and 90 percent of exports flow from oil.

The price collapse is terrible news for a country that never made sense, with its desolate Muslim north and oil-endowed Christian south. If there’s one nominal ally we should worry about with oil prices so low, it’s Nigeria.