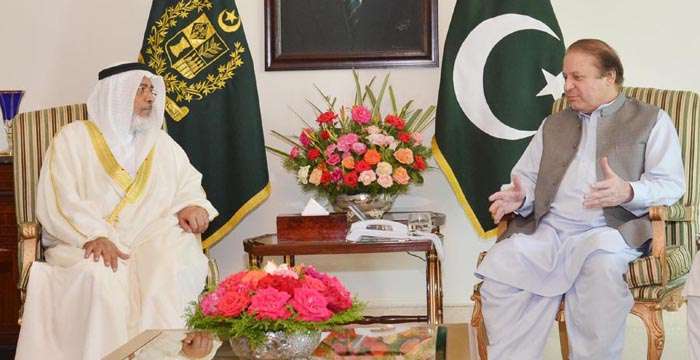 Prime Minister said that the recent visit of His Majesty the King Shaikh Hamad bin Isa Al Khalifa King of the Kingdom of Bahrain is a testament to the fact that Pakistan and Bahrain enjoy close and cordial relations based on mutual trust and understanding, which are deep rooted in our culture and history.

“Our two countries have always stood by each other in testing times and we deeply appreciate the assistance extended by the Kingdom of Bahrain following natural calamities in Pakistan over the years”, Prime Minister said.

The institutional framework of Bilateral Political Consultations between the two Foreign Ministries, enhanced interaction at governmental level, bilateral economic and trade cooperation were also discussed in the meeting.

Prime Minister said that the present government has introduced investor-friendly policies, due to which several foreign companies and governments have invested in many projects. Prime Minister said that Pakistan would welcome Bahraini investments in projects in the field of energy, downstream oil industry, port development, mining and minerals, infrastructure, education, banking, engineering and manufacturing sectors.

H.E. Khalifa Bin Ahmed Al-Dhahrani thanked the Prime Minister for receiving him and his delegation. He reciprocated the warm sentiments expressed by the Prime Minister about the importance of Pakistan-Bahrain relations. He agreed that there was a need to enhance Pakistan-Bahrain economic and trade cooperation, noting that cooperation between the two parliaments was increasing and it should continue. He particularly mentioned the positive role of the 90,000+ Pakistani expatriate communities in Bahrainin the country’s development. He extolled the Pakistani community’s contributions in promoting and protecting Bahrain’s security and stability. The Prime Minister affirmed that the people of Pakistan were happy to contribute to Bahrain’s prosperity, security and stability and they would continue to do so.

H.E. Khalifa Bin Ahmad Al Dhahrani is visiting Pakistan at the invitation of his counterpart, Sardar Ayyaz Sadiq, who assisted the Prime Minister in the meeting