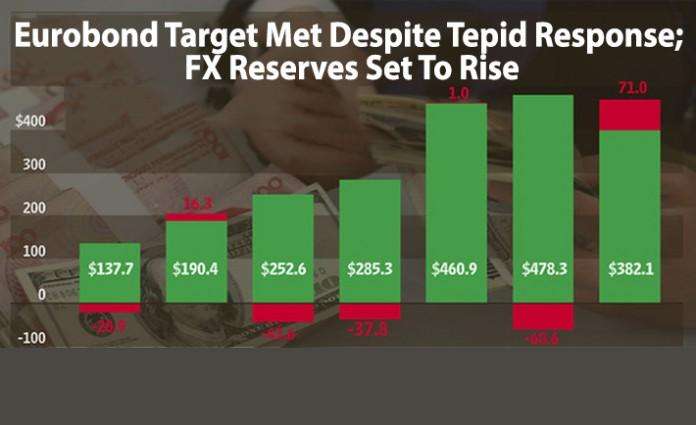 Pakistan’s concluded a 10-year, US$500mn Eurobond US$500mn issuance last week (pricing held on Sep 24th). This is the fourth time since April 2014 that Pakistan has tapped into international bond market to support its external account.

While the investors’ response on pricing and subscription size was less enthusiastic relative to past issues, we attribute this to not-so-favorable timing and market situation. Bond receipt coupled with likely approval of IMF tranche of US$502mn (meeting due today) should lead to FX reserves rising to US$19.2bn (5.4-months of import cover), an all-time high level (US$18.8bn seen last in Jul-15) but does not trigger any change in our estimate.

From the equity market perspective, the pricing and size are seen as important signal for investors’ confidence on Pakistan’s reform program, in our view. Though the country’s latest rating upgrade reflects the progress on reforms, the same has failed to translate into the latest bond issue. That said, absence of oversubscription of bond is a marginal positive for banks as the implications of additional domestic liquidity created via Eurobond issue is unlikely to change government’s dependence on bank financing.

No big changes in Public debt…

The PKR impact of bond receipt (PRs52bn) is most likely set to reduce the domestic debt by equivalent amount, leaving public debt level unchanged (65% of GDP in Jun-15). With the current issue, the government has effectively covered the upcoming maturity of 2016 Eurobond, where a reserves drawdown of US$500mn is due in Mar-16. We reckon the government is likely to tap into the bond market again in 2HFY16.

…but fails to beat market expectations

The Eurobond float comes in at a time when progress on Pakistan’s macro reforms is smooth, external stability is set to improve further supported by favorable oil price scenario, credit rating upgraded by Moody’s (to B3) last quarter and upgrade by S&P expected as early as next quarter. In this backdrop, the latest issue is set to trigger some disappointment due to:

(1) The size of float did not beat market expectations of US$0.5-1bn in line with the budgetary documents indication of US$1bn Eurobond float in FY16. The press release by Ministry of Finance highlights the weak appetite of the global market owing to global uncertainty, which has led to countries with stronger credit rating to cancel their sovereign issues while restricting the GoP to its intended target of US$500mn.

(1) global economic conditions (Fed rate hike decision, Chinese slowdown etc), and
(2) outlook of domestic reforms progress given Pakistan has entered into the difficult leg of reforms. Pakistan 5-year CDS is also up by 40-50 to 505 postglobal rout.