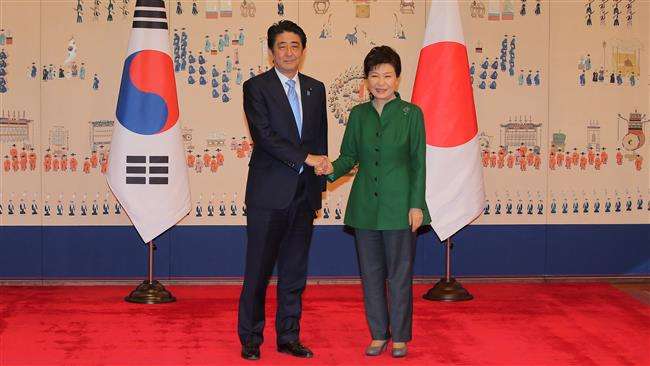 “He (Abe) said Japan would like to cooperate with South Korea and the United States at various occasions to preserve the open, free and peaceful sea,” the Japanese official said.

‘Common cause of concern’

Hagiuda also said Abe highlighted concerns over the situation in the South China Sea, saying it was a “common cause of concern for international society.”

The South China Sea is of great significance to Japan and South Korea as much of their trade and energy supplies pass through the waterway.

Earlier, Japanese Defense Minister Gen Nakatani reiterated that Japan had no intention of participating in US-led patrols in the South China Sea.

The US has accused China of being engaged in massive “land reclamation” in the Spratly archipelago in the South China Sea by building islands there.

Beijing says it seeks to safeguard its sovereignty and territorial integrity in the South China Sea.

During the Monday summit, Abe and Park also agreed to work to resolve other differences dating back to World War II, including the issue of “comfort women,” in which many Korean women were purportedly forced to work as sex slaves during Japan’s 1910-1945 colonization of Korea.