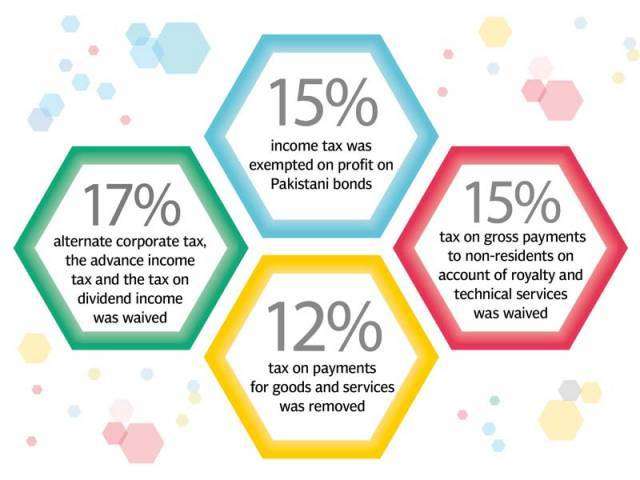 In a violation of law and apex court judgment, the government on Monday waived 10 taxes on the upcoming international Sukuk bond issue, which is expected to raise at least $750 million.

The government is going to tap the international debt market next month to borrow $750 million to $1 billion by pledging the Islamabad-Lahore Motorway aimed at offsetting growing pressure on its balance of payments due to a steep decline in exports.

The figure may cross even $1 billion, depending on the response of international investors.

Headed by Finance Minister Ishaq Dar, the Economic Coordination Committee (ECC) of the cabinet granted tax exemptions on the Islamic bonds, according to the finance ministry.

The main beneficiaries of the decision will be local and foreign investors who will invest in the bonds and a consortium of financial advisers, comprising five banks, hired to manage the transaction.

For the first time, the government also admitted that “the trade account has been worsening and consequently pressures are building on the balance of payments,” revealed an official summary of the Finance Division.

It came just two days before the International Monetary Fund (IMF) is going to approve the last loan tranche of $102 million under the $6.2 billion three-year bailout programme.

The loan had been acquired to avoid default on international payments and even before its expiry, the government is back to international markets to offset the pressure on balance of payments.

The ECC exempted up to 15% of income tax on the profit that the investors would enjoy by purchasing Pakistani bonds.

It also waived 17% alternate corporate tax, the advance income tax and the tax on dividend income. The 15% tax on gross payments to non-residents on account of royalty and technical services was also waived.

Up to 12% tax on payments for goods and services was also removed. It waived 0.3% tax on cash withdrawals on these transactions and 0.4% tax on banking transactions related to the issuance of Sukuk. Income tax on the sale and purchase of air tickets was also exempted.

The Federal Board of Revenue (FBR) supported the move.

The finance ministry quoted some of the income tax sections in its summary for the ECC that had been omitted 11 years ago. The mistakes were rectified after they were pointed out by FBR Chairman Nisar Mohammad Khan.

The ministry said if these taxes were not waived, the transaction cost would make the Sukuk undesirable for the international investors, resulting in high pricing for the country.

In its summary, the finance ministry admitted that it was issuing Sukuk to have a comfortable level of foreign currency reserves.

It said the country had saved more in oil imports but these savings had been used to support higher imports of machinery and industrial raw material. “Accordingly, the trade account has been worsening and consequently pressures are building on the balance of payments,” said the ministry.

The ECC drew the authority under Section 53(2) of the Income Tax Ordinance to give exemptions, according to the summary.

However, Dr Ikramul Haq, Advocate Supreme Court of Pakistan, said the section did not apply to the Sukuk transaction, as there was no national emergency and the government should have approached parliament to get the taxes waived.

Section 53(2) authorises the ECC to waive taxes in case of “national security, natural disaster, national food security in emergency situations, protection of national economic interests in situations arising out of abnormal fluctuation in international commodity prices, removal of anomalies in taxes, development of backward areas and implementation of bilateral and multilateral agreements”.

The ECC decision also violated the Supreme Court judgment that barred the ECC from taking decision on fiscal matters without prior approval of the federal cabinet, said Haq. The parliament’s powers cannot be delegated to the ECC and if the government does not like the Constitution it should get it amended, he said.

The ECC also approved to reduce prices of imported urea fertiliser from Rs1,310 per bag to Rs1,200 per bag, giving Rs30.4 million subsidy.