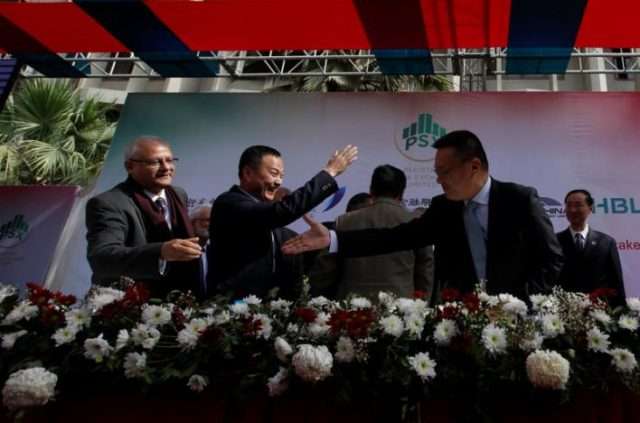 Chinese directors to join PSX board by February 10

Four Chinese directors would be appointed on the board of the Pakistan Stock Exchange (PSX) by February 10, the PSX chairman Munir Kamal said on Wednesday.

“Names of Chinese consortium’s representatives have been received and would be made public after the approval from the SECP (Securities and Exchange Commission of Pakistan),” Kamal said, speaking at the Jang Forum.

“At the moment, there are 10 members on PSX board, including six nominated by SECP and four elected by bourse’s members. On February 10, the SECP-nominated directors would be reduced to two and four would be elected by members and four representing Chinese consortium.”

Kamal said another 20 percent PSX stake would be sold to public through initial public offering by June 30. He said rising stocks market reflects improvement in the economy, “As both are directly connected.”

“Law and order situation has improved significantly, political environment is relatively stable, corporate growth is robust and multilateral institutions are satisfied with the macro-economic situation,” he added. “All these factors contributed towards the record growth of stocks market in Pakistan.”

Arif Habib, chairman of Arif Habib Group said investment in government securities, real estate, commodities and forex is not productive and does not contribute to the economy.

“Investment in listed stocks, on the other hand, encourages industrial as well as services sectors growth, hence generates employment opportunities and contributes to the national exchequer in the form of taxes,” Habib said.

He underlined the need of public awareness about the stocks investment as just a fraction of the country’s population is investing in the listed securities.

Arif Habib Group chairman said the market is growing and the future is quite bright as more and more companies are coming to the stocks market.

“Arif Habib Limited alone is managing around 10 IPOs (initial public offerings) this year and it is hoped that SMEs (small and medium sized enterprises) would also be attracted towards the bourse,” he added.

Shahbaz Ashraf, head of research at Arif Habib Limited said the PSX gave an estimated 46 percent return during 2016, “which put Pakistan in the spotlight as the best performing market in Asia and the fifth best in the world.”

He said the benchmark KSE 100-share Index recorded a return of two percent in January last year. The returns stood at 29 percent to date in the current fiscal year of 2016/17. In January, main board index made an all-time high of 50,887.