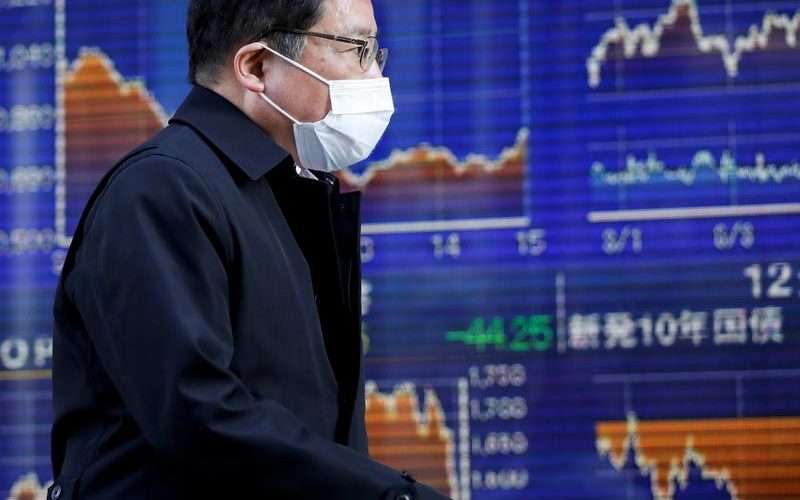 Japan’s Nikkei fell 1.1%, bruised by news that new coronavirus cases in Tokyo hit a record high near 500 and reports that the city may ask businesses to shorten their hours again.

But many Asian markets bucked the trend, with MSCI’s broadest index of Ex-Japan Asia-Pacific shares rising 0.3%, helped by better handling of the pandemic in much of the region and a continued pick up in China’s economic recovery.

“There is also speculation that Biden administration would be more friendly to the Chinese economy, though that view may need a reality check,” he added.

The retail sales report released by the U.S. Commerce Department showed spending decelerating as the holiday shopping season approaches, amid a lack of fresh fiscal relief from Washington.

A skittish mood also swept investors as several U.S. states began restricting gatherings and mandating face-coverings after more than 70,000 Americans were hospitalized for treatment of COVID-19.

“We’re are coming out of a solid two weeks so the market being down half a percent isn’t that bad with the prospect of COVID lockdowns,” said Jamie Cox, Managing Partner for Harris Financial Group.

U.S. Federal Reserve Chairman Jerome Powell noted the current surge in coronavirus cases is a big concern, and the economy will continue to need both fiscal and monetary policy support.

“The soft U.S. retail data is showing the impact of dwindling fiscal support. But the inconvenient truth is that governments no longer have lots of money to spend like they did earlier this year,” said a trader at a major Japanese bank.

“That means investors will expect the Fed to do more and the U.S. yield curve will flatten.”

Falling U.S. yields put pressure on the U.S. dollar, against the yen in particular.

The dollar slipped 0.2% to 104.01 yen, erasing more than a half of its gains made on Monday last week following the news about COVID-19 vaccine development.

Sterling held firm after UK tabloid the Sun reported that Britain could reach a post-Brexit trade agreement with the European Union by early next week.

Bitcoin briefly jumped more than 3% to $18,293, edging closer to a record peak near $20,000 marked in December 2017, extending its bull run after PayPal last month allowed its customers to use the cryptocurrency on its network.

Bitcoin, while highly volatile, is attracting investors seeking an inflation hedge as they worry money printing by central banks around the world since the start of pandemic could end up debasing the value of fiat currencies.

Oil prices eased on a bigger-than-expected build in U.S. crude stockpiles, though hopes that OPEC and its allies will postpone a planned January increase to oil output braked losses. [O/R]