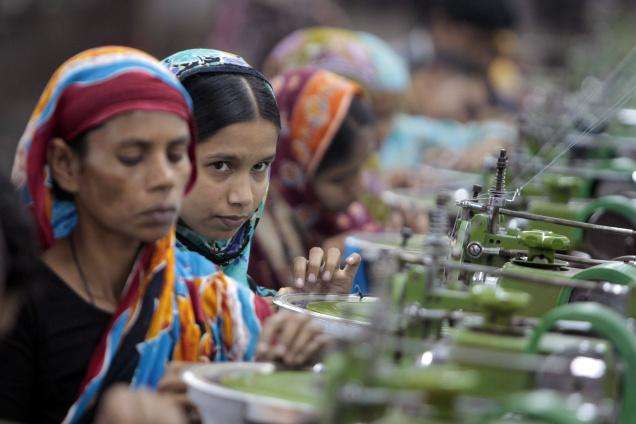 The task of coping with a 79 percent increase in the minimum monthly wage to $68, imposed last December at the urging of some retail chains, comes as competition intensifies among emerging markets producing garments for stores like Walmart WMT.N and Zara ITX.MC. That is squeezing sales in Bangladesh’s main export industry.

At Dhaka-based clothing company Simco Group, one of the thousands of businesses the sector comprises, chairman Muzaffar Siddique said that before the wage increase his net profit margin was a little more than 2 percent. Now he’s losing money on orders, and reckons four out of every five garment makers in the world’s second-biggest clothing exporter after China are in the same boat.

“I approached one of my Western buyers to raise prices, and the relevant company said, ‘It is your business and you have to manage it … you cannot slip it to us’,” Muzaffar said. He declined to identify the Western buyer.

Nearly a year after the eight-storey Rana Plaza building collapsed in Dhaka’s Savar district, killing more than 1,100 workers, Bangladesh’s garment export growth has slowed to the lowest rate in 15 years. Some buyers have shifted orders to countries like India, Vietnam, Indonesia and Cambodia because of concerns about workshop safety, higher wages and political uncertainty.

Rana Plaza was the deadliest of a series of workplace tragedies in Bangladesh’s garment business. Some Western retailers have lobbied for higher wages and better standards for workers – and also have warned investors there may be a price to pay in terms of reduced profit margins.

Babylon Group, a garment factory in Dhaka that says it makes clothing for major global retailers, is another company struggling to adjust to the higher cost base. It employs more than 12,000 people, and since the wage hike has lost money making clothing for customers, according to documents seen by Reuters.

Emdadul Islam, a director with Babylon, asked that the customers not be named for fear that he would lose business.

“Wage pressure will affect efforts to improve safety,” said Emdadul. He said retail customers had agreed to pay “a little” more for their order, but the price rises were not enough to cover the higher wages.

Emdadul said Babylon plans to improve productivity to help restore profits margins. He said he intended to offer incentive bonuses, and to advise workers “not to kill time through idle gossip”.

He said his company conducts safety training drills, has the required fire safety equipment and is subject to inspections organised by the global retail brands as part of the Rana Plaza response. If the inspections turn up any problems “we will definitely pay attention and address those,” he said, adding that investment in improving safety was “ongoing”.

At Impressive Group, a garment maker located about six miles from Dhaka, managing director Mohammad Mosharraf Hossain Dhali said buyers from the United States and Canada were paying 5 to 10 cents more per piece of clothing. That only partially defrays the rise in wage costs, he said, declining to identify the buyers in question.

“It is not possible to sustain continuous losses so our focus is to raise productivity by 20 percent,” Mosharraf said. The factory would apply “motivation tools” such as incentive bonuses to get workers producing clothing faster, he said.

The Rana Plaza collapse, on April 24, 2013, focused attention on working conditions in Bangladesh. U.S. and European retailers responded by forming groups to push for better safety standards and regular inspections.

The U.S.-based Alliance for Bangladesh Worker Safety said its members had made more than $100 million in low-cost capital available to Bangladesh factories to help pay for safety improvements. Three factories have so far finalised paperwork for loans totalling about $1 million to $2 million, it said.

“We do anticipate an increase in loan applications in the months to come,” Ellen Tauscher, independent chair of the alliance, said in an emailed statement.

Mesbah Rabin, the alliance’s Bangladesh-based managing director, said inspections had been carried out at 400 of 720 factories selected for review that previously met supply chain standards for the companies the alliance represents. Funds would be made available after the reviews were completed in July, Rabin said.

The Bangladesh Accord on Fire and Building Safety, which was set up after Rana Plaza and counts many European retailers among its signatories, also plans to make an unspecified amount of low-cost loans available to help factories pay for upgrades.

Retailers are expected to pay suppliers enough to make it “financially feasible” for factories to comply with the safety requirements, spokesman Joris Oldenziel said in an emailed response to questions from Reuters.

Britain’s supermarket operator Tesco Plc TSCO.L, which includes clothing in its range of goods, said in a statement to Reuters it had lobbied for higher Bangladesh wages and would continue to work with suppliers to improve pay and shorten workers’ hours. U.S. clothing chain Gap Inc GPS.N said it had also pushed for increased wages and requires vendors to pay either the legal minimum wage or the local industry standard, whichever is higher.

Bangladesh’s ready-made garment exports have lost steam over the past four months, growing just 7.1 percent in January compared with the same month a year earlier, less than a quarter of the year-on-year growth rate recorded in November.

“Immediately after the Rana Plaza disaster export orders started to fall quickly,” said Mohammad Shahidul Azim, a vice president of the Bangladesh Garment Manufacturers and Exporters Association, which represents a majority of the factories.

Several factory owners interviewed by Reuters said they were losing orders to rivals in places like Vietnam, Indonesia and Cambodia. Pakistan was also picking up orders since January when it was granted duty-free trade access for its ready-made garments to the European Union, adding to pressure on Bangladesh’s factories to keep prices low.

The Rana Plaza disaster was by no means an isolated incident in the history of Bangladesh’s garment industry. In 2012, scores of workers perished in a fire at a factory on the outskirts of Dhaka called Tazreen Fashion.

Yet Babylon’s Emdadul said Rana Plaza made a huge difference for the industry, likening its disastrous impact to that of the Sept. 11, 2001, attacks on the United States.

For the first time in his 27 years in the business, he recently received a call from a customer wishing to slash the size of an order, a French company seeking 60,000 shirts rather than 130,000 as per previous orders. He declined to identify the customer.

“Buyers were a bit cautious after the Tazreen fire incident, but Rana Plaza was like a 9/11 in the sector,” he said.