Pakistan’s trade deficit widened to a record high of $20.2 billion during the eight months of the ongoing fiscal year, an amount $5.2 billion higher than the deficit recorded in the comparative period of the previous year and equivalent to the annual projections for the entire fiscal year.

The trade deficit, gap between exports and imports, widened to $20.2 billion during July-February, reported the Pakistan Bureau of Statistics (PBS) Saturday.

The ballooning deficit may expose vulnerabilities of Pakistan’s economy, as financing such a huge gap in the midst of falling remittances and stagnant foreign direct investment has become a challenge for the federal government. This will increase more reliance on expensive foreign borrowings.

The deficit is close to the $20.5-billion target that the Finance Ministry had fixed for fiscal year 2016-17, ending on June 30.

Nose-diving exports and skyrocketing imports are the reasons behind the deficit, the highest level recorded in the first eight months of any fiscal year in the country’s history.

The trade deficit during the first eight months of this fiscal year was 34.3% higher than the gap recorded in the same period of the last fiscal year.

Exports plunged 3.9% to only $13.3 billion during July-February, $541 million less than the exports made in the comparative period of last year. In comparison, the import bill increased 16% to $33.5 billion in the same period. In absolute terms, the import bill was $4.6 billion higher than the previous year. 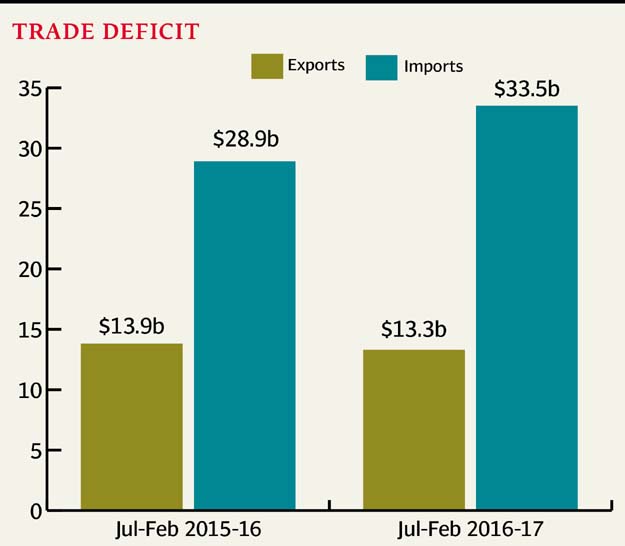 Exports in eight months were just 53% of the annual target of $24.8 billion, which shows that like the previous three years the government would not be able to achieve its annual export target. This comes despite the government giving two-bailout packages to exporters in the last 12 months.

These packages were given without addressing the root causes – the high cost of doing business and lack of an enabling environment. In its four budgets, the PML-N government levied an unprecedented Rs1.2 trillion in new taxes on every kind of trading, business and banking activity. It also slapped various surcharges on electricity and gas, increasing the cost of doing business for the industries.

Although import details for February would be available after one week, the first seven-month data showed that a major reason behind the surge in import bill was the import of machinery under China-Pakistan Economic Corridor

During the July-January period of the fiscal year, Pakistan imported $6.9 billion worth of machinery, 42.3% higher than the previous year. The machinery imports was the single largest charge on the import bill followed by petroleum products imports that stood at $5.8 billion in seven months.

The imports were three-fourth of the annual projections, suggesting that the country will have a larger than $45.2 billion import bill at the end of the fiscal year.

This would mean a higher trade and current account deficit.

Remittances that remained an important source of financing the external account are on a decline due to changing economic conditions in the Gulf countries. Overseas Pakistani workers remitted $12.36 billion in the first eight months, which were about 3% less than the previous year.

Pakistan’s current account deficit widened by 90% in the first seven months (July-January) of 2016-17, standing at $4.72 billion compared with $2.48 billion in the same period of the previous year. The State Bank of Pakistan has not yet released the current account results for the month of February.

Exports in February this year stood at $1.63 billion, showing contraction of 8.3% when compared with the results of last year, according to the PBS. In absolute terms, exports were down by $148 million. However, growth in imports jumped to 35.5%, as the bill grew to $4.5 billion in February this year. The import bill was $1.2 billion more than last year.